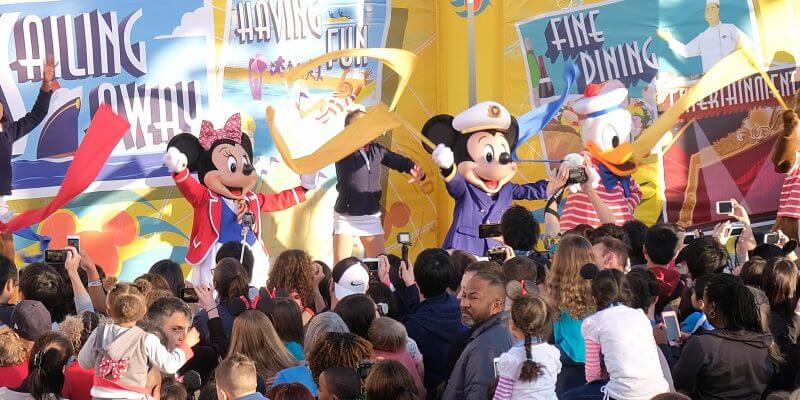 10:00 am Snorkeling – Upon arriving on Castaway Cay’s breathtakingly beautiful beach, my friend and I immediately rented snorkel gear to check out the crystal-clear ocean that surrounds this tropical island. A special lagoon is marked in the water for you to snorkel in and in this lagoon is where you can see some of the island’s hidden treasurers. Some of these hidden treasurers included a ride vehicle from Walt Disney World’s late 20,000 leagues Under the Sea attraction and a wooden Mickey Mouse statue.

I am not someone who snorkels a lot but I will say this was a fun experience. Although, before heading into the water I recommend looking over the gear you receive. The flotation vest I got unfortunately had a tear in it and I didn’t realize until I was already pretty far out in the ocean. The life guards stationed in the middle of the lagoon have back-up vests but having to swim over to them only causes extra physical exhaustion on your body. Mind you, the lagoon is very large and long and the entire experience is definitely a workout.

1:00pm Bike Rental – I have to start by saying that there really is no better way to experience the beauty of this island then by its bike trails. Not only do you get to ride through the island’s beautiful greenery and by its spectacular coast but it also includes a few scenic stops along the way. This includes a special secluded view of the beach line, a wood structured tower that overlooks the shoreline and different artifacts found around the island. These were just some of the experiences we had time for on the island. If you’re curious of some of the many other offerings this beautiful island has to offer, be sure to check out its official website.

3:00 pm Heads Up Bar – After a long day of snorkeling and bike riding, we stopped for some drinks at Heads Up. What was so special about this bar though was the fact that its physical bar actually overlooked the ocean and featured a beautiful view of the Dream docked at port.

Overall, Heads Up is definitely a great spot for anyone who wants to enjoy specialty drinks after a long day of soaking up the sun on the Island.

5:45 pm Royal Palace Dinner – I have to start by saying that this restaurant was my favorite to dine in, specifically because of its grand interior. Modeled after classic Disney films, including “Cinderella,” “Snow White and the Seven Dwarfs,” “Sleeping Beauty” and “Beauty and the Beast,” the essence of this restaurant is very royal and rich. Throughout the restaurant guests can also find different art from the films it was inspired by.

One of my favorite design elements that really captures the essence of the Disney princess vibe had to be the glass slippers found on the lighting fixture hung in the center of the main dining room. The restaurant also features beautiful chandeliers hung throughout and pumpkin coach bread baskets. Dinner at the Royal Palace consisted of three courses. I started with the Duck Confit, made with slow cooked duck leg pulled and garnished with dried cranberries and walnuts. I personally have only had duck a few times and was never too much of a fan but this dish wasn’t bad. The duck was served cold and when paired with the cranberries and walnuts it made for a tasty dish. My main dish was the Oven-Baked Salmon Royale, crowned with a king smoked salmon horseradish crust and spinach. The normal version of this dish contains dairy items but I received this special version of it made without Swiss Chard. The crust added a nice flavoring to the fish, which was prepared nicely. It cut perfectly and was nice and flaky. For dessert I got a special dairy free option, an almond cake topped with dairy-free chocolate syrup and cut strawberries and blueberries. A nice sweet ending to a delicious dinner. The cake was a little spongey, which isn’t a texture I am a big fan of when it comes to desserts. However, it was sweet and when combined with the chocolate sauce it made for a great tasting dessert. 8:30 pm “Believe” at Walt Disney theater – I must start by saying this show was similar to “The Golden Mickeys” with the fact that it was a combination of Disney musical numbers tied together with an underlying story. The main story of “Believe” revolves around a botanist who is excited to unveil a new type of flower to a committee, but in the process dismisses his daughter who only wants to spend time with him and do magic.

The singing and dancing by the cast was very well done and each number was very reminiscent of the film it came from. I would rate this show a little higher than “The Golden Mickeys” because of the fact that it does revolve around a more heartfelt story but I wouldn’t say it was at the same level of “Beauty & the Beast.” If you are someone who loves musical theater and classic Disney films then I would certainly recommend it, however if you saw “The Golden Mickeys” the first night then you would have already experienced a very similar type of musical.

WATCH – THE “PRINCESS AND THE FROG” MEDLEY FROM “BELIEVE” SHOW: 10:15 Disney Tunes Trivia – Located in the D lounge, my friend and I teamed up against the rest of the lounge’s patrons to test our knowledge of popular Disney songs from the company’s large list of classic films. Upon grouping up into teams, each group is handed a paper and pencil to write down the names of the songs they hear aloud.

Each round can earn you two points depending if you can guess not only the name of the song, but also what film it’s from. If you are looking for family fun then this is definitely a fun experience to check out. The entire event is only 30 minutes long so it can be fit into any night pretty well without taking up too much time.