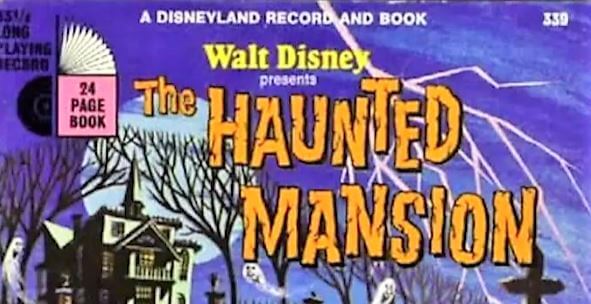 I was very fortunate to have parents who encouraged reading.  As far back as I can recall, I’ve always enjoyed a library of imaginative books.  These included several Dr. Seuss titles, Disney character stories and more.

One of my favorite reading activities, though, involved my record player.  I cannot recall how many needles had to be replaced over the years, but many of those replacements can be attributed to repeated plays of the various Disney Read-A-Long book and record titles that I was given. Children, in 1965, were the first to be amazed by a new kind of reading experience.  That was the year in which Disneyland Records began producing a magical blend of telling their tales.  The combination of a narrator spinning specially adapted stories with magical audio queues was pressed on a seven inch disc of black vinyl. Partnering those story telling records with a 24 page, colorfully illustrated booklet that contained the exact same text as the spoken words from the record gave birth to a wonderful new type of media: read along records.

Early editions (until 1976) were narrator driven only.  Sound effects and dialogue (when available) from the theatrical production were eventually added.  Also, Until 1976, Tinkerbell had the very important role of announcing when it was time to turn the page.  The sounds of her “little bells” were replaced with generic audio queues, merely described as “chimes” after that.

Original Introduction:
“This is a Disneyland original Little Long-Playing Record, and I am your story reader. I am going to begin now to read the story of [insert title here]. You can read along with me in your book. You will know it’s time to turn the page when Tinker Bell rings her little bells like this: (sound of ‘chimes’ ringing). Let’s begin now.”

From second edition pressings onward (including all cassette and CD recordings), sound effects, narration and music, often from the original source story’s soundtrack, were added.  When a score was not available, Disney pulled from a library of generic music composed specifically for the records.

As new technology emerged, the read along records became read along cassette tapes.  At first these featured the same story on both sides of the cassette, but eventually evolved to either contain music or a second feature on side B.  Vinyl pressings stopped being produced in 1987.

The infamous “SEE the pictures HEAR the record READ the book” tag vanished from book covers in 1991.

Hundreds of various stories were released.  A sample list of these wonderful reading tools can be found here.  A few examples are shown below:

“Treasure Island” was adapted for the SEE, HEAR, READ collection in 1971 Beloved Disney attraction, “It’s a Small World,” gets an interesting treatment in this 1978 read along record release. Of course, my personal favorite was, and still is, the “Haunted Mansion.” Yet another treasure, “20,000 Leagues under the Sea,” condensed the classic film down to six and a half minutes: In addition to titles telling tales of popular Disney characters, movies and attractions, read along records were also crafted based upon non-Disney movies, stories, and subjects.  These included “Star Wars” (long before the Walt Disney Company acquired Lucasfilm), Little Golden Books, “Star Trek,” and much more. “The Hobbit was also released in a full 12 inch LP version that contained additional songs and a less condensed version of the Rankin-Bass film. This later version of read along books was produced with dialogue and music from the 1977 cartoon. Today these brilliant reading tools can be found in the form of compact discs.  Dozens of titles, in CD format with booklet, are still available for purchase. For me and my siblings these “SEE the pictures HEAR the record READ the book” LP records were the modern day equivalent of today’s DVDs (with the added bonus of sharpening reading skills).  I honestly believe, along with watching “Walt Disney’s Wonderful World of Color,” this cultivated my appreciation for all things Disney.

Did you own any of the Disneyland read along records?  What were some of your favorite titles?  No need to wait for Tinkerbell to wave her magic wand, simply share your stories in the comments below.