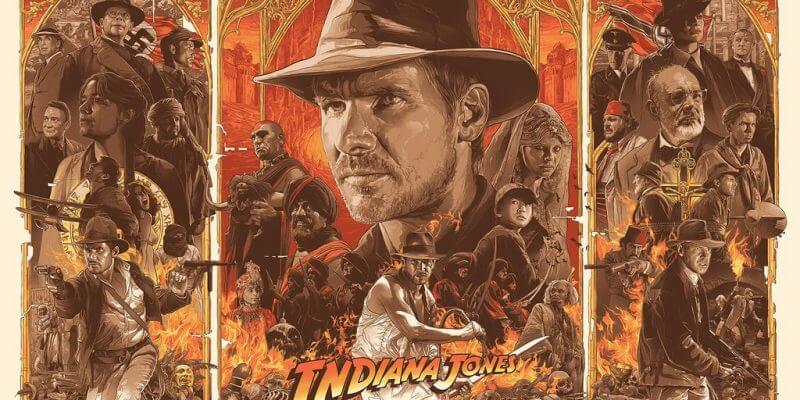 Polish pop-culture artist Gabz Grzegorz Domaradzki has been generating amazing-looking movie-inspired art for more than a decade, and his new piece inspired by director Steven Spielberg and Lucasfilm‘s first three “Indiana Jones” adventures is no different.

In an officially-licensed three-panel, horizontally-oriented poster, Gabz has depicted characters and scenes from 1981’s “Raiders of the Lost Ark,” 1984’s “Indiana Jones and the Temple of Doom,” and 1989’s “Indiana Jones and the Last Crusade.” What’s interesting beyond the eye-catching, intriciately-detailed graphic design is that “Temple of Doom” gets the most real-estate– the middle chapter has historically been the least admired of the three, though I personally adore it. Screen prints with metallic inks of the above artwork (measuring 36″ by 24″) are available now from Bottleneck Gallery for $50 each. There was also a $65 Variant edition with more muted grayscale coloring limited to 250 pieces, but as of this writing that has already sold out. Indiana Jones is currently scheduled to return to the big screen in a fifth feature adventure on July 10th, 2020.