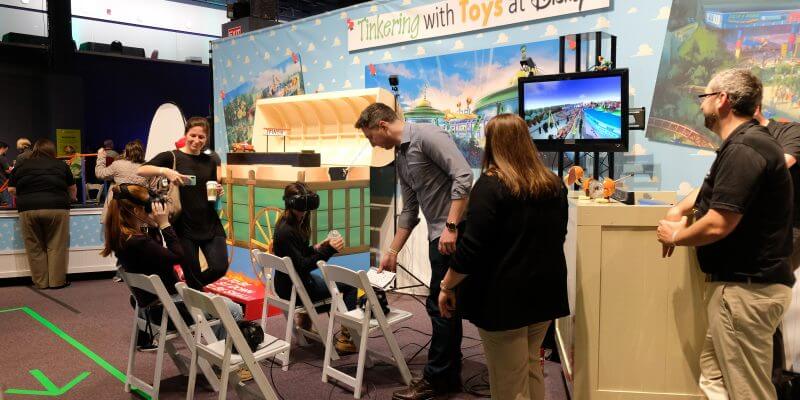 Otronicon returned to the Orlando Science Center this past weekend with a VR preview of the Slinky Dog Dash Ride coming to Toy Story Land in Hollywood Studios and a look at the many creative tech centers around Orlando. At the event, representatives from Disney had set up a virtual reality seating area where guests could sit in rows and wear VR goggles as they got a look at the Slinky Dog Dash Ride. The VR goggles took you along the ride’s track, showing its twists and turns and elements placed around and in the ride. Disney also had two other booths at the event, both dealing with VR. One booth was interactive with the Disney Color and Play smart phone app. Visitors to the booth were given pre-printed outlines of “Finding Nemo” characters, which were to be colored in. Once the outlines were colored in, they could be placed in front of an iPad’s camera using the Disney app, which displayed the colored image in 3D. Another Disney themed booth at the event utilized VR goggles and a material wall with pieces of tape and ping-pong balls. From any by-stander’s point-of-view, it didn’t look like much. But upon placing the glasses on your head, players of the game would see bullseyes inspired by the ones found in the Toy Story Midway Mania! attraction at Disney’s Hollywood Studios. Players could take the balls and throw them at the bullseyes to get points. Similar to the attraction, the player with the most points won! The event also included a massive amount of local creative tech companies who came to show off some of the exciting things they are working on as well.

One special creative tech company featured at the convention was the Melrose Center, located in downtown Orlando in the Orlando Public Library. The technology learning center had set up a boxing VR experience that let visitors box with virtual zombies. As one could imagine, an awesome experience like this would have a line. Well no fear for this long line, because guests waiting got to control the sound effects the player would hear as they played the game. A MIDI controller with different sound effects was set out on a table by the experience for people in line to control. The experience at the booth was put together by an instructor from one of the center’s virtual reality game design classes. The Melrose Center features a variety of classes to anyone in Orange County. With only a library card, students get access to the center’s photography studio, simulator lab, video studio and audio studio, all for free.

The center also offers courses in photography, videography, virtual reality and audio and sound mixing. All of which are also free as the center is owned and operated by Orange County.