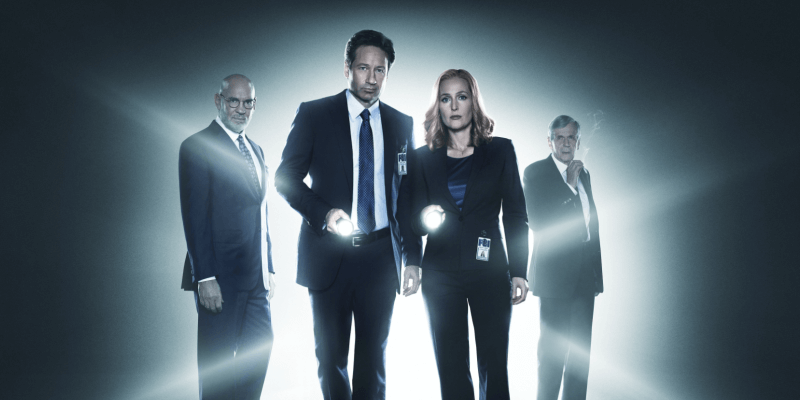 A couple weeks ago, Disney announced its acquisition of 20th Century Fox, a deal that included many of Fox’s film and television properties, including (among many others) the “Alien” franchise, “The Simpsons,” and “The X-Files.” And tonight “The X-Files” returns for the second season of its revival, making it the twelfth overall since the show first debuted back in 1993 (yep, that’s 25 years ago).

Not for nothing, but during the series’ heyday I considered myself one of the franchise’s biggest fans. I watched (and video recorded) every episode from the premiere onward, attended conventions, and saw the first theatrical movie (1998’s “The X-Files: Fight the Future”) three times on opening day. I even won an X-Files trivia contest in a room full of members of what was at the time the internet’s largest “X-Phile” fan community. Suffice it to say that I’ve been fairly committed to the show for the past two and a half decades. I followed it all the way through to the end, showed up for the second feature film (2008’s “The X-Files: I Want to Believe”), and had moderate hopes that the 2016 revival would recapture some of the eerie spirit and compelling mythology that I felt had dropped off in the series’ later years. To put it mildly, I was disappointed.

As we approach tonight’s twelfth-season premiere, I’m feeling not excitement but hesitation and wariness about the continuation of “The X-Files” ongoing story, and fear that this new batch of episodes will be more of the same quality that we received last time around. With that in mind, I thought I’d list a few reasons why season 11 didn’t work for me, and what I hope improves this time around– with whatever hope I have left for what was once my absolute favorite TV show. One of the first things “The X-Files” did in its 11th season was dismiss nearly everything that had come before. A new informant character convinced Mulder that the government’s decades-long experiments with UFO technology and alien-human hybrids was a lie, and none of that new information was refuted before the season’s end. While I’d never argue that the show’s mythological elements were completely water-tight during the original run, it’d be nice to see the powers that be at least make an effort to enforce some kind of continuity.

How many times can Agents Mulder and Scully question the loyalty and trust of FBI Assistant Director Skinner before finding out that he was on their sides the whole time? It’s a maddening trope that was overused even in the show’s early years (until around season five when we settled on the conclusion that, yes, Skinner is a good guy), and I’m still flabbergasted that they trotted it out once again. It’s a problem symptomatic with the short-term memory demonstrated in the above example. After 25 years, let’s let these characters’ experiences finally amount to something. Did anyone like Agents Einstein and Miller, the younger Mulder and Scully surrogates played by Lauren Ambrose and Robbie Amell? It felt painfully obvious to me (and I’m sure, other fans) that these two were being set up as replacements if and when series stars Gillian Anderson and David Duchovny decide not to return for any more outings. Why not lean more heavily on existing supporting characters like A.D. Skinner, who only popped up briefly here and there, instead of relying on untested fresh faces?

4 – Stand-alone episodes were muddled and overcomplicated.

Usually when “The X-Files” slips up in the mythology department, you can at least fall back on the series’ monster-of-the-week episodes to deliver solid scares and satisfying twists. Not so in season 11, which contained one really strong Darin Morgan-penned comedy episode and a couple of half-hearted efforts from the heretofore trusted team of show veterans Glen Morgan and James Wong. I won’t even comment on creator/showrunner Chris Carter’s outright bizarre terrorism drug trip episode. I’d say they should have made more of a push to bring back all-star writer Vince Gilligan, but at this point I think his talents are better served over at “Better Call Saul.” I’m not necessarily talking about the actors here. In fact, both Duchovny and Anderson (heck, especially Anderson) look terrific for their age. But the characters themselves– Fox Mulder and Dana Scully– just seem ready to give up the endless quest for “the truth.” After we found out Mulder’s long-lost sister Samantha was dead back in the seventh season, what was really left for these two as far as a driving force goes? They’ve both seen aliens, they’ve both confronted their demons… what more is left to accomplish? Maybe this year will see the pair reunited with their son William and we can finally put the whole thing to bed.

Now, I’m not saying it’s impossible for “The X-Files” to ever recapture the essence of what made the first five years or so of the original run so great, but season 11 simply didn’t do it for me. It’s worth noting that Carter has admitted some of that go-round’s shortcomings, and assured fans that some of the rust has been worked out this time around. If that turns out to be the case, fantastic. I would love for “The X-Files” to find its relative footing and fire on at least some of its sci-fi cylinders from here on out.

But if season 12 turns out to be a dud once again, I’ll be the first to admit it’s time to put “The X-Files” out to the UFO graveyard permanently. I can get by with revisiting the DVDs every once in a while. Still, I’ll be tuning in tonight and each Wednesday over the next ten weeks regardless. Hope springs eternal, even in a pop culture franchise whose motto is “Trust no one.”