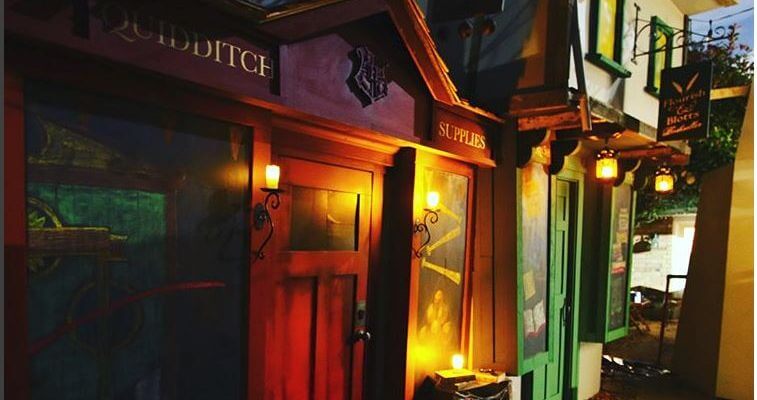 What happens when you love Halloween, are a big fan of Harry Potter and your job is coming to an end? If you happen to be Seattle resident Jon Chambers, you fulfill your dream to create a magical holiday season sensation.

The 46-year-old Whittier County resident, inspired by his children’s passion for Potter (and his own love for the wizarding wonder) along with help from 50 of his neighbors came together to cast their spell for the muggles of Seattle. After two weeks of work, a magical materialization of Diagon Alley, inspired by J.K. Rowling’s wizarding wonder, appeared in Chambers’ driveway just in time for Halloween. Locals and many from further away visited this amazing recreation. While there was no charge to enter, his daughters collected donations for pancreatic cancer research. Those who donated were given a mug of butterbeer for their kindness. 3,000 visitors passed through the brick walls in just the first two days. “Jon’s wife, Jennifer Chambers, said she was still amazed by the people who make the effort to stop by. She said a couple from Texas flew into Seattle and their first stop from the airport was Diagon Alley. On Friday, a young boy who was between treatments for leukemia at Children’s Hospital in Seattle came by to see the project.” –GeekWire

This delightful driveway diversion remained opened to enchant visitors through the holiday season. Gringotts, complete with dragon-topped dome, was added for Christmas. The distinguished dragon, sporting a 20-foot wingspan, was crafted by Frank Carillo after he saw the project posted on Facebook. The Leaky Cauldron was also installed for the winter wizarding wonderland, allowing Haley and Avery Chambers to offer Potter-inspired treats. Adding additional cheer, Dumbledore Santa also apperated to greet guests for the holiday. After the holiday happiness finished its run, parts of the project (The Leaky Cauldron and Gringotts bank) were donated to raise funds for the Whittier County Elementary School PTA.  They were auctioned and have become perfectly purposed playhouses.  The remaining magical materializations have been donated to Camp Korey, an escape that is part of the “seriousfun” network of camps for families dealing with serious medical issues and childhood illnesses. Visit the Diagon Alley website to learn more about this amazing feat of at home imagineering, including how you, too, can donate to the cause.

Comments Off on At Home Imagineering: Diagon Alley Driveway