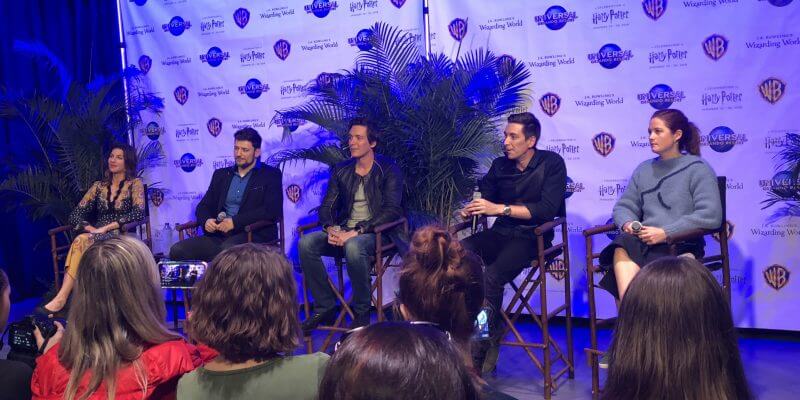 A Celebration of Harry Potter weekend kicks off with a special Q&A featuring some of the film’s popular stars, a special opening ceremony and a Harry Potter-themed performance from the Orlando Philharmonic Orchestra.

Presented by Warner Bros. and Universal Orlando Resort, A Celebration of Harry Potter has dazzled die-hard Harry Potter fans in the past and tonight the magical celebration returned and was kicked off with special activities that any Potter fan would love.

The night began with a special Q&A featuring the movie stars Oliver and James Phelps (Fred and George Weasley), Bonnie Wright (Ginny Weasley), Stanislav Ianevski (Viktor Krum) and Natalia Tena (Nymphadora Lupin). During the Q&A the movie stars were asked serious and fun questions, ranging from what their favorite things to do at the park were, to advice of how to get started in the entertainment industry. To take a look at some highlights from the event in the video below. WATCH – CELEBRITY Q&A FROM A CELEBRATION OF HARRY POTTER:

After the star-studded Q&A, the event continued with a special Opening Night Ceremony at Music Plaza Stage. During the ceremony new details were revealed of the upcoming Harry Potter games, audio books and a special contest was announced for guests of the weekend’s celebration to win tickets to “Harry Potter and the Cursed Child” stage show. The film’s stars that were present during the Q&A also came out for a few moments during the ceremony. Oliver and James Phelps (Fred and George Weasley) took the stage to announce Milan, Italy would be the next city to host the Harry Potter Exhibition, an experience where guests get a close and personal look at the artistry and craftsmanship that went into creating the iconic props and costumes that appeared throughout the Harry Potter films. It was also announced during the ceremony that the Harry Potter book series will receive a 20th anniversary special edition. The entire book series will be re-released in new editions this coming July, with seven brand-new covers designed and illustrated by Brian Selznick. Selznick was present at the event and discussed the news. The event also included a closer look at this weekend’s events taking place at A Celebration of Harry Potter. We have the full Opening Ceremony below.

After this special Opening Ceremony, the event concluded with Highlights from The Harry Potter Film Concert Series. This show featured the Orlando Philharmonic Orchestra performing fan-favorite songs from the Harry Potter films live to the movie clips projected on a giant HD screen behind them. Some of the scenes featured in the show included the Quidditch scene from the first film and the scene where Harry gives Dobby clothes, freeing him from slavery in the second film. Below you can take a look at some highlights from the show.

For more coverage of A Celebration of Harry weekend, be sure to keep checking back to our website. For an even deeper look at some of the celebration’s panels and events, visit the official website.

Comments Off on A Celebration of Harry Potter weekend kicks off with a Celebrity Q&A, Magical Opening Ceremony and a Harry Potter-themed concert performance