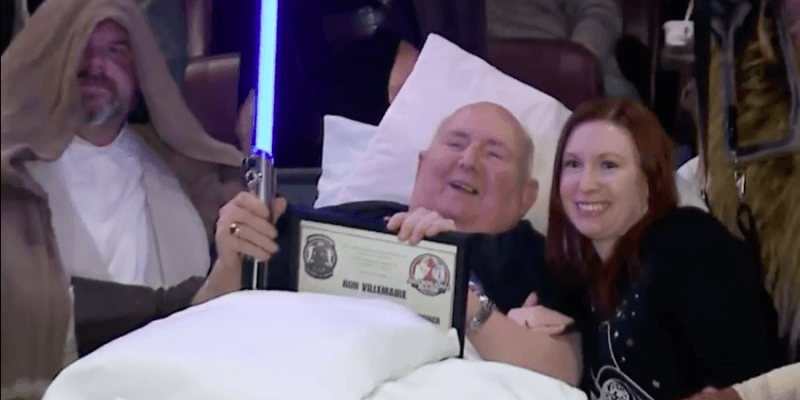 A New Hampshire community came together to do something special for a “Star Wars” fan in need.

Ron Villemaire, an Air Force veteran and major “Star Wars” fan, is suffering from stage four colon cancer. His daughter, Elizabeth Ngo, purchased tickets for “Star Wars: The Last Jedi,” hoping he’d be well enough to see it in theaters. However, as his illness progressed, he started receiving hospice care in Bedford, New Hampshire and became too sick to travel to the theater.

Elizabeth started asking for help via social media, and their community joined forces to make sure Ron would get his wish to see the movie. First responders from the Bedford Fire Department escorted him to the theater, where he was greeted with a cinema full of “Star Wars” characters and a private screening of the new film.

“I never would have believed it would have turned out like this,” said Elizabeth Ngo. “I mean, this is incredible.”

Comments Off on VIDEO: Veteran gets dying wish to see “Star Wars: The Last Jedi” thanks to his New Hampshire community