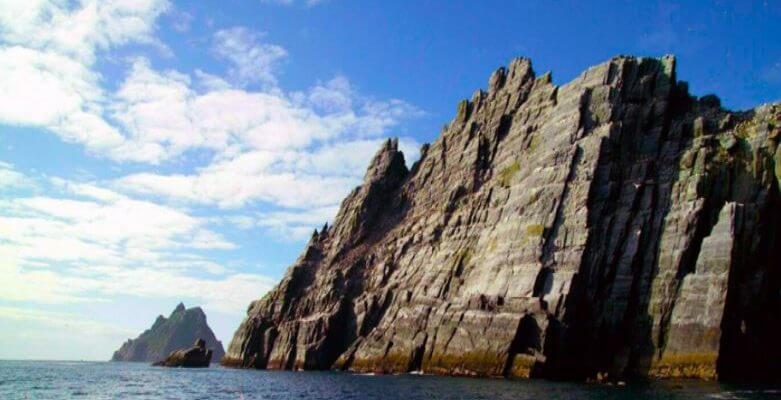 The Jedi Knights built their temple in a remote and hard to find location. Filming of that isolated Jedi Mountain took place on an equally secluded island just off the coast of Ireland, known as Skellig Michael. It’s a location that you can visit and this breathtaking, historical island hosts tourists every summer.

You won’t find any Porgs here, nor will you be able to obtain any blue milk.  Luke, Rey, Yoda and the nuns are long gone.  However, you’ll definitely recognize the structures and scenery that was featured at the end of “Star Wars: The Force Awakens” and in the most recent film from a galaxy far, far away: “Star Wars: The Last Jedi.”

The temple (actually a monastery) and huts are there, appearing very much like they did Episode 8 of the saga.  Breathtaking views and exotic wildlife await visitors every summer (May-October). Birds like Puffins, Manx shearwaters, and European storm petrels call the island home. Roughly 54 acres in size, the highest point on the island is 715 feet up. Upon a shelf, at about 600 feet up, rests an ancient monastery. This Gaelic Christian retreat was established somewhere between the 6th and 8th century A.D. Historical records show the island was sacked by Vikings in 823. The priory was abandoned some 400 years later, but a small cemetery still remains, adjacent to the monastery. Due to the historic significance of the stone structures on the island, it was granted a World Heritage listing in 1996. As of 2010, Skellig Michael (so named for the island’s dedication to Saint Michael) was also designated a “Special Protection Area,” making it a sanctuary for the birds nesting there. Two types of tours are offered. An Eco Tour cruises around the island, with historic structures and more all visible from the boat. Island (landing) tours take limited numbers of guests onto the island, allowing them to explore for 2 ½ hours with a guide on hand to share and show the history of the island. There are no bathrooms on the island. However, facilities are available onboard the boats. Be sure to follow the weather before visiting, as a climb up the 640 steps to the monastery (as seen in the Star Wars movie) is steep and narrow, which is why it is not permitted when wet weather makes those stones slippery. Skellig Michael Cruises provides eco tours (30-35 EUR) which are available from March 15th to November 10th and Skellig Michael Tours (landing), which can be booked between May 15th – October 2nd.

Casey’s Tours provides eco tours (70 EUR), which are offered from mid-April to mid-October, and landing tours (140 EUR) take place between mid-May to early-October. A trip to Ireland is an exciting adventure on its own, and having the opportunity to visit a historic location that was used in the making of two Star Wars movies is a brilliant bonus.  The Force may be strong with Skellig Michael, but now that the secret is out, so will the tourists.  Be sure to book well in advance to ensure your spot.