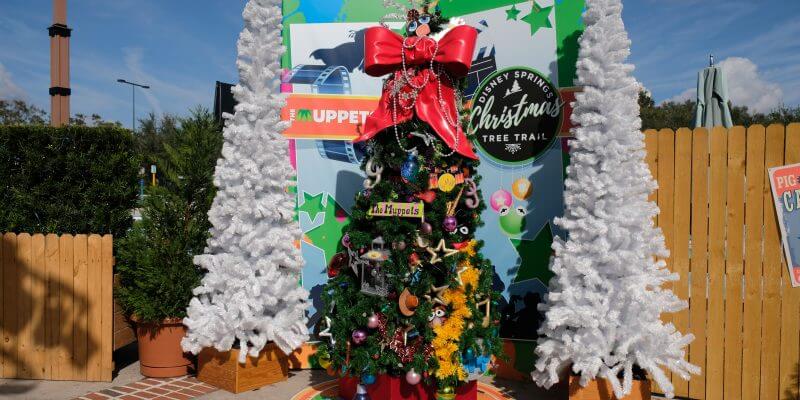 The Christmas Tree Trail at Disney Springs has over 25 different Disney themed trees. Here is a look at the top 10 best!

The Christmas Tree Trail is a winter wonderland that mixes together the famous holiday tradition of Christmas trees with the magic and wonder that comes from classic and beloved Disney films and characters. Some of the Disney films featured in the theming of trees in the trail are some of Disney’s biggest box office hits, like “Frozen,” “The Little Mermaid,” and “Tangled.” Here is a look at our top 10 favorite from the holiday-themed walk-through attraction. We rated the trees on this list as the top ten best because of their theming and inclusion of specific elements from the famous Disney films or characters. The list starts at 10 and counts down to the very best at number 1. Everyone loves the famous dog who first appeared back in 1930 in his first animated film “The Chang Gang.” Pluto is a historic part of the Disney company and this tree is a great representation of him! It is full of everything Pluto, including dog food bowls, Mickey Mouse themed collars, Pluto’s dog house from his early cartoons and Mickey Mouse head shaped treats. This high flying elephant was featured in the fourth-ever Disney animated feature film. This inspirational elephant’s tree follows closely to its film with circus-themed tree ornaments, such as lions, tigers, zebras, peanut bags and clowns. The tree topper really makes this tree as it features Dumbo’s iconic ears and his little yellow hat with Timothy Mouse’s hands sticking out of them.

8. The Princess and the Frog This new-age Disney film marked the company’s return to traditional animation, as it was the studio’s first traditionally animated film since “Home on the Range.” Its themed tree sparkles with crystals and Mardi Gras colored decorations. Some of these decorations include colorful masquerade masks, shiny and colored flowers and golden trumpets and horns. The two most well-known characters of The Walt Disney Company, Mickey & Minnie’s tree is a simple and straightforward nod to the beloved couple. It features the pair’s iconic color scheming of red, yellow, and white in a mix of different combinations through Christmas ball decorations, bows and Mickey-head shaped Christmas balls. This next tree is themed on one of Disney’s most musical and iconic films of all time, “Fantasia.” The tree includes the iconic bucket, dancing mushrooms, Christmas balls painted to look like bubbles, a dancing broom and a lightning bolt. The tree topper really finishes this tree as it is of course the Sorcerer’s Hat. Themed off one of Disney’s classic princesses, this tree explodes with florals as the entire tree is full of colorful flowers. The tree also includes balls of yarn, in reference to the spindle Princess Aurora pricks her finger on, which sends her into a deep sleep. Everyone loves to hate them and you may have even had nightmares about them as a kid! This tree features elements of Villains from the Disney films. Some include Ursula’s tentacles from “The Little Mermaid,” and the Magic Mirror and the Poisoned Apple from “Snow White.” Loosely based on the German fairytale “Rapunzel,” this musical film marked Disney’s 50th animated feature film. This tree features Rapunzel’s hair, which runs around the tree from its base to its top, floating lanterns, a paint brush and palette and from one of the funnier scenes of the film, the infamous frying pan. Featuring the iconic songs, “Under the Sea” and “Part of Your World,” this musical film is beloved by many Disney fans. The tree features Christmas ball ornaments that resemble bubbles, treasure chests filled with gold and jewels, sea shells, a pocket watch and it is topped off with one of the film’s most iconic props, King Triton’s Trident! The number one tree at Disney Springs‘ Christmas Tree Trail is from every kid’s favorite Disney film and TV series, “The Muppets.” This group of puppets are not only a hilarious bunch that brings laughs to audiences around the world but they are also known for their awesome musical tunes. To commemorate their music, the tree was decorated with musical ornaments, such as music notes, guitars and drums. What really makes this tree a showstopper though, has to be its massive tree topper, a big and shiny red bow!

Be sure to visit The Christmas Tree Trail at Disney Springs today, before it closes for the season on January 7. The hours of operation for the experience are Monday through Thursday, noon to 10:00 PM and Friday through Sunday, 10:00 AM to 10:00 PM