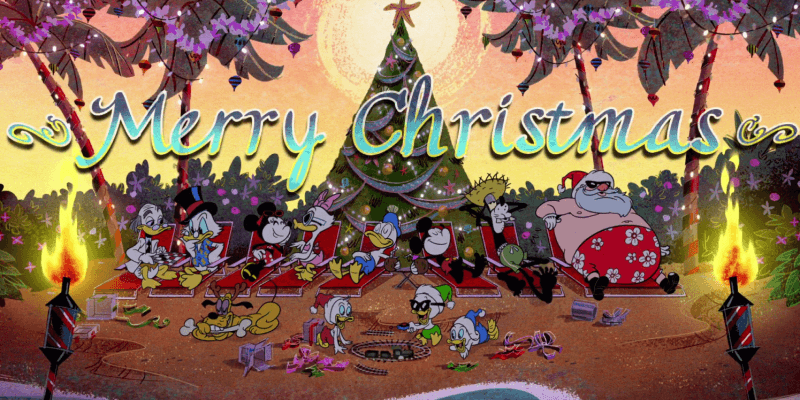 For almost 90 years, Walt Disney’s mousterpieces of amazing animation have made us laugh and cry. These treasures have entertained millions over the years.  The holidays are no exception. The Walt Disney Company has released scores of winter themed and Christmas cartoon to the delight of fans world-wide.

As Christmas creeps closer, we turn our tinsel tuned attention to these terrific toons.  From venerable Silly Symphony specials of the golden age of cartoons to the modern Mickey Mouse marvels, we’ve gathered a few of Disney’s best for you and your family to enjoy.

First unwrapped on December 10, 1932, “Santa’s Workshop” gives us a gleeful glimpse into the preparations for that infamous Christmas Eve sleigh ride. Fair warning, what is (and should not be) acceptable for viewing today was, sadly, the norm in the 1930’s (insensitive stereotypes can be seen throughout the cartoon).

2.  “The Night before Christmas”

3. “Parade of the Wooden Soldiers”

Set up as an MTV style music video, this holiday adaptation of “Parade of the Tin Soldiers” features scenes from the 1935 Silly Symphony “Broken Toys” to create a Christmas themed sing-a-long video.  The soldiers and other cartoon Christmas Carols were part of the collection called “Disney’s Very Merry Christmas Songs,” originally released in 1998 on VHS Cassette.

Chip and Dale encounter the temper of Donald Duck in this 1949 Disney winter wonder.  Directed by Jack Hannah, the short was first shown in movie theaters on December 16, 1949.  It has also appeared as an extra on several Disney DVD releases.

This delightful adaptation of Dickens’ classic Christmas ghost story (which happens to be the most adapted novel in history) casts a host of Disney character favorites in various roles of the infamous story of redemption.

We all know that ducks fly south for the winter.  Enticed by the winter wonderland of Christmas magic offered by Mickey Mouse, Donald Duck decides not to migrate this year.  Filled with great gags and holiday hoopla, this Christmas special is a seasonal sensation worth watching over and over (get your copy on Amazon). Classic Christmas cartoons and modern animation amazements are festively fun way to ensure a cool Yule.  Old or new, any of these six seasonal specials are perfect for setting a holiday mood or a brief distraction on the road over the river and through the woods.

Do you have a favorite Disney Christmas cartoon?  Please animate your thoughts in the comments below.