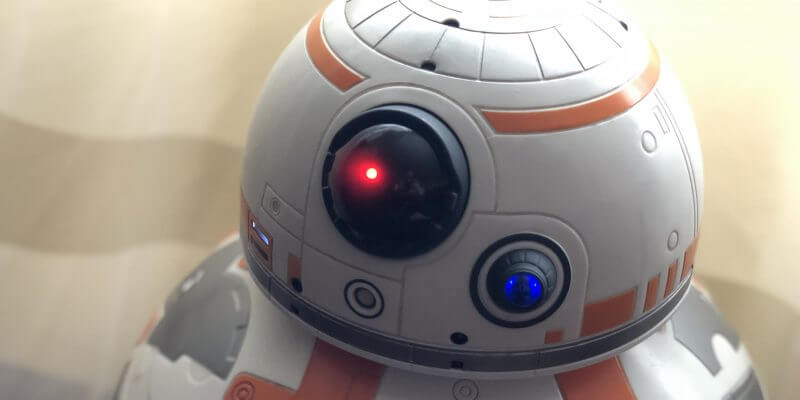 Ever wanted your own “Star Wars” droid? Now you can have one that is not only fun to play with, but also feels like a cute little companion – just like in the films.

From SpinMaster comes the BB-8 Hero Droid, which retails around $150 and is worth every penny. For the purposes of this review, SpinMaster sent me one of these playful droids and I can’t get enough of him.

This nearly life-sized droid arrives out of the box appearing straight from the droid factory, free of scuff marks or any signs of wear-and-tear from seeing action in the real world. Perfectly shiny, all he needs is a little charge to put him into action. BB-8 comes in two pieces, the head and the body, which feel substantial, not like a cheap plastic toy by any means. This droid has some weight to him. And after a 3-hour charge (both pieces require charging separately), he is ready to go. There are three modes of play with the BB-8 Hero Droid, the voice control mode easily being the most fun. Once enabled by the flip of a switch on the remote control, you can talk to BB-8 and have him respond without ever having to hold the remote or use an app. It’s completely hands-free and feels natural. Saying “Hello” or “BB-8” elicits an excited response, while saying words like “Stormtrooper” or “Kylo Ren” bring out signs of fear, making you want to protect him. Asking him about Poe Dameron will make him cuddle against your leg. Telling him to “stand guard” puts him in a mode that is ready to sound an alarm when his sensors capture movement. The list goes on and on. You can even tell him to “come here” and he will, keeping a distance. Saying “closer” will get him to draw nearer. And a snarky “move, ball!” Will make him roll away. BB-8 also slips into different moods of his own, from playful to curious to sensitive and guarded, making this toy feel just like he acts in the films. It’s a nice touch. He moves his body, head, lights up, and makes sounds that give him his characteristic personality.

Those who want complete control over the droid can flip a switch on the remote control to literally command his every movement. He’ll stop responding to voice commands in this mode, instead acting as a standard remote control vehicle, with forward, backwards, and turning controls enabled. He’s quite speedy and responsive, but there’s something just a little bit weird about manually controlling him. It takes the personality and life out of BB-8, turning him into just another standard toy. Out in open spaces, putting BB-8 into Follow mode allows him to roll at a distance behind you, following you everywhere you go. You have to keep the remote control within eyesight of the droid for this to work, so it’s a little clunky. If you make sudden movements or dart off to the side, BB-8 can too easily lose sight of you and it takes a while for him to recover. Of the three modes, this is the least functional and fun.

Overall, I highly recommend SpinMaster’s BB-8 Hero Droid for every “Star Wars” fan who has ever wanted to own a droid. I have played with smaller remote control droids from many companies over the years and this is the first off-the-shelf droid that I truly felt like he stepped (or rolled) straight out of the movies and into my living room. I only wish there was some kind of docking bay he could easily sleep on to recharge him, so he would be ready to play at a moment’s notice. I can see why Poe Dameron grew so attached to BB-8. After just a little while, I kind of want him at my side at all times.

There’s still time to pick up the BB-8 Hero Droid as a fantastic Christmas present. It’s likely too late to get him on Amazon in time for the holiday, but your local Target may still have him in stock. Good luck and May the Force be with you.