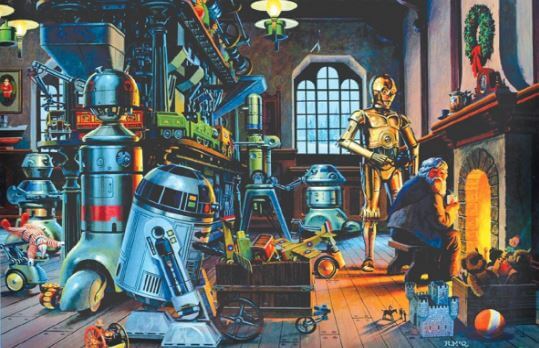 Question: What do Jon Bon Jovi, Star Wars and Christmas have in common? Answer: “Christmas in the Stars.”  That’s right, there’s a Star Wars Christmas album.  It could very as well be the “Star Wars Holiday Special” of Star Wars music or a coveted collectable depending on your taste for holiday music and Star Wars memoribilia.

Hold tight! We’re about to journey to a long, long time ago to take a close look at this bizarre piece of Star Wars Holiday memorabilia.

The 1980 Meco (“Star Wars and other Galactic Funk”) produced the album, which had 9 tracks and featured the voice of Anthony Daniels as C-3PO.  It was released on the now defunct RSO records label and was intended to be annual tradition. Of the nine seasonal songs, “What Do You Get a Wookie for Christmas (When He Already Owns a Comb)?” is probably the most recognized, thanks to shows like “The Doctor Demento Show” helping to propel into a recurring top-40 holiday hit. In 1980 the song topped out at 69 on the Billboard Hot 100.

On the flip-side of the Wookie Christmas song, R2-D2 took center stage, subject of the song,”R2-D2 We Wish You a Merry Christmas.” It was on this record that John Bongovi, better known today as John Bon Jovi made is musical debut.

John, then 17 years old, worked for his cousin Tony Bongovi, sweeping floors at Tony’s recording studio, which handled the recording of the LP.  Tony Bongovi co-produced “Christmas and the Stars” and John took the lead vocal spot for one of the songs.

“Christmas in the Stars” was re-released in 1996 on Rhino Records (which was also the label to several novelty song compilations curated by music guru and radio show host Doctor Demento).  The LP, CD and Cassette can still be found as a reissue on Amazon ($30.86-$52.94) I still have my 45 single “What Do You Get a Wookie for Christmas (When He Already Owns a Comb)” as well as a digital copy (CD long gone) of “Christmas in the Stars.” I may just have to dig that up to play on the way to see “Star Wars The Last Jedi.” Comments Off on Retro Retail: Hear the official 1980 “Star Wars” Christmas album, “Christmas in the Stars”