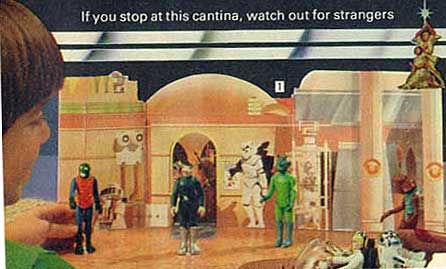 As a kid who grew up without the internet, easily accessible cell phones, and many other modern “conveniences,” the arrival of the Sears Christmas “Wish Book” at our home was a sign Santa’s visit was not that far off.  My brother, sister and I would take turns perusing the pages picking out present possibilities.

The 1978 version of the “book of all things” was especially exciting.  Within the pages of this tome of toys, new Star Wars fun from Kenner sparked my imagination.  All the new things!  I had to have them!

“Star Wars” had blasted its way onto theater screens just over a year prior (1977). By 1978, the game changing movie tie-in merchandise was making its way to store shelves (and toy boxes).  Christmas 1978 was a full year after the cardboard “early-bird” pre-purchase plan had been hatched and the amount of Star Wars toys available made my 12 year-old head spin.

Kenner’s toys from the galaxy far, far away graced the pages of that 1978 Holiday catalog making the Star Wars figures, accessories and more the perfect pairing for letters to Santa and many smiling children on Christmas morning. Watering hole to Tatooine’s wretched hive of scum and villainy, the Cantina offered more imaginative play options for any of the new action figures introduced that year. This Sears exclusive item was essentially a colorfully decorated cardboard display showing the outside of the no droids allowed bar. Getting to that Cantina was a breeze with Luke Skywalker’s ‘floating’ landspeeder.  Built with park and glide modes, it accommodated up to four action figures. Lights, sounds and battle simulating ejection solar panels on the T.I.E. fighter were no match Luke’s X-Wing fighter, especially when the small fighter locked its spoilers into attack position. Coveted most of all was the mighty Death Star was represented in a four story play set, complete with trash compactor (including the dianoga monster), “exploding” laser cannon, light bridge and elevator. Also found in the pages of that treasury of toys from Sears: an illuminated light saber (inflatable blade) and Star Wars pajamas. Most of us didn’t worry about saving the box or keeping an action figure trapped in its packaging.  These toys were meant to be played with!  Yet even those battered and battle scarred toys fetched a pretty penny several years later (a decision I’m still at odd with myself over).

Today the force is strong with George Lucas’ merchandising miracle. Toys of all kinds from nine different Star Wars movies can be found almost anywhere.  Amazon seems to have replaced the Sears Wish Book for the 21st Century.  Drones, action figures, app controlled droids and all except the most recent release (“Star Wars: The Last Jedi”) are available for streaming or purchase (something unheard of in 1978). Did you own any of the original Star Wars toys from the late 1970s?  Which were your favorites? Share your heroic tales in the comments below.