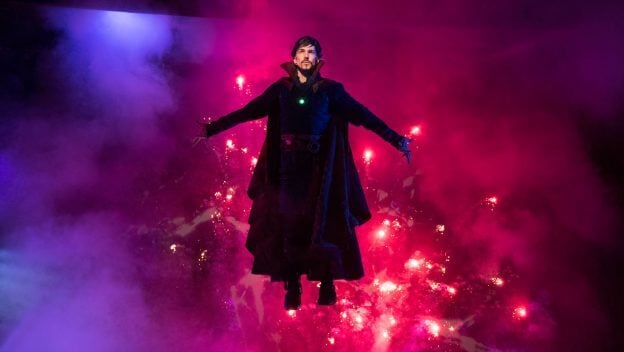 Disney Cruise Line has done their very best to transport guests to the Marvel Universe with their Marvel Day at Sea cruises and these two stage shows really put the whole experience over the top.

Guests can learn from the Sorcerer Supreme during “Doctor Strange: A Journey into the Mystic Arts.” The Walt Disney theater aboard the Disney Magic is transformed into the Sanctum Sanctorum, the residence of Stephen Strange, and guests are given a lesson in the Mystic Arts before putting their skills to the test in a battle with the Dark Dimension. At “Marvel Heroes Unite” guests are invited to join Tony Stark at his exclusive gala to see some of the latest technology from Stark Industries. He is joined by Captain America, Black Widow and Hawkeye before the villainous Loki interrupts. Loki and a team of villains battle our heroes before Thor, Spider-Man, Black Panther, Doctor Strange, Star-Lord, Gamora and Groot join the fray. Marvel Day at Sea returns to the Disney Magic on select cruises out of Miami this January through April.

Comments Off on PHOTOS: Doctor Strange and Marvel heroes dazzle guests with spectacular shows for Marvel Day at Sea