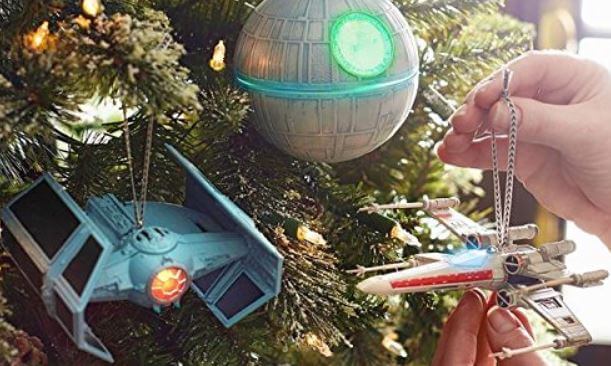 I’ve been a fan of the “Star Wars” franchise from day one.  Seeing George Lucas’ masterpiece for the first time in the small twin theater (megaplexes, IMAX, and such didn’t yet exist), was a life changer.

This holiday season, I am amazed at the tech that’s been introduced into Christmas ornament versions of characters and ships from the Star Wars universe.  The magic keeps getting  . . . impressive (written in best James Earl-Jones voice).

Listed below are my top 5 Star Wars Christmas Ornaments

1. Motion Activated Peekbuster  Storm Trooper Sound Ornament
The motion sensor sets of a series of holiday adapted Stormtrooper quotes for this festive find for your fir (or other Christmas tree).  A fun deterrent to ward off wayward younglings tempted to peek at what’s under the tree. 2. Vader helmet with sound
Loaded with familiar phrases from the Dark Lord, this Darth Vader helmet is a perfect presentation for anyone wanting a sinister Sithmas (or Star Wars) presence for the holidays. 3. X-Wing sound and light  Storyteller Ornament
Intended to interact with the matching Darth Vader TIE Fighter and Death Star (below) ornaments, this bit of Star Wars wizardry is absolutely amazing to experience.  Hear Luke and R2 as they battle their way into the depths of the Death Star’s treacherous trench on a mission to destroy the planet killer.

4. Death Star Light and Sound  Story Teller Ornament
Listen in as Grand Moff Tarkin and Darth Vader press Princess Leia for the location of the Rebel Base and then watch as the station powers up to destroy her home planet of Alderaan. 5. Death Star Tree Topper
Released last year, this is the perfect companion to the ornaments above.  This particular Death Star is no planet killer, though. Instead the glowing globe gives a musical performance of the “Imperial March” and the “Main Title” from “Star Wars.” The out of this world ornaments listed above are but five (my personal favorites) from the Star Wars universe. There are several more Hallmark masterpieces from the galaxy far, far away.  From C-3PO to R2-D2, dozens of familiar characters are ready to bring the Force to your Christmas tree. Does your Christmas tree tout a Star Wars Hallmark ornament or two?  What is your favorite one?  Please tell your tale in the comments below (narrative movie–like intro scrolling not included).

Comments Off on Fav 5 Star Wars Christmas Ornaments from Hallmark