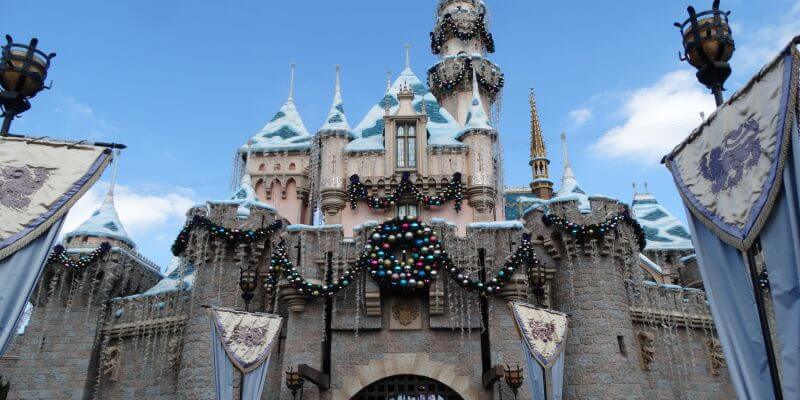 Ho ho ho, and Merry Christmas! It’s that time of year again, and I can’t think of a better place to celebrate the holidays than at Disneyland Resort, where Sleeping Beauty Castle, Main Street USA, and other areas around both parks have been decorated with festive lights and snow. Of course, there’s plenty to see and do at Disneyland and Disney California Adventure this time of year. Let’s take a look at some of the highlights.

One of the main attractions at Disneyland during the holiday season is “A Christmas Fantasy Parade,” wherein toy soldiers, chubby little snowmen, and Santa Claus himself join Mickey Mouse and Friends for a Yultide Celebration guests won’t soon forget.

Over at Walt Disney’s classic It’s a Small World attraction, the ride has been completely transformed with its glorious It’s a Small World Holiday seasonal overlay. More than 250 animatronic characters bring the season to life, singing a mix of “Jingle Bells,” “Deck the Halls,” and the classic “Small World” tune we know and love.

Outside It’s a Small World Holiday, guests can gather to watch the evening’s “Believe… In Holiday Magic” fireworks show. It’s a fun alternative to camping out in front of the castle, and you still get to enjoy projections on the facade of Small World itself!

Across the Disneyland Resort Espanade in Disney California Adventure, Donald Duck and his Caballero buddies are celebrating a Mexican Christmas the only way they know how… with the fabulous ¡Viva Navidad! street performance. Mickey and Minnie even show up for a cameo appearance near the end.

And during Festival of Holiday’s alongside DCA’s Pacific Wharf, guests can catch fantastic live performances by a wide variety of holiday-themed musical acts such as Phat Cat Swinger, who brought the house of Mouse down with their big-band feel and plenty of Christmastime hits.

Special events and shows for Holidays at the Disneyland Resort run from now through January 7th in Anaheim, California. Be sure to visit the resort’s official website for more information.