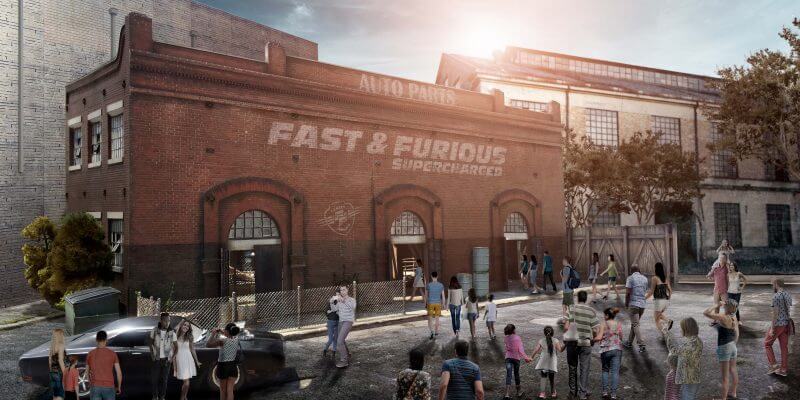 From their press release:

Soon, Universal Orlando’s newest attraction, Fast & Furious – Supercharged, will race into Universal Studios Florida and bring one of the world’s hottest film franchises to life in a whole new way.

Fast & Furious is a global phenomenon and one of the highest-grossing film franchises of all time. Millions of people from all over the world have been captivated by the action-packed storylines, unique characters and high-speed cars. In Spring 2018, the next chapter of this blockbuster franchise will come to life with Universal Orlando’s new attraction: Fast & Furious – Supercharged. Guests will have the opportunity to actually live the excitement they’ve seen on the big screen in a high-octane ride experience where they will become part of the Fast family.

Here are a few more details about the supercharged new ride from Universal:

According to Universal, you’ll be immersed in an original, supercharged story.

As soon as you approach the attraction, you see Dom’s Dodge Charger parked outside – and you know exactly where you are.  Welcome to the underground headquarters of the “Fast family.”

Inside, you’re immersed in the ultimate Fast & Furious experience. Hit songs from the films’ soundtracks fill the rooms as memorable scenes from the series play around you. You make your way through familiar places inspired by the films, like the Family Room – complete with photos of the Fast family – and Tej’s high-tech War Room.

You are invited to attend a race after-party that can’t be missed, and Tej arranges for a custom party bus to get you there.

As you make your way to the party, Dom calls with an urgent message. Owen Shaw is headed your way. A high-speed chase ensues, and you must rely on the Fast family to lead you to safety. But will it be enough to keep you and the gang from the clutches of Shaw?

Comments Off on VIDEO: First look at “Fast & Furious – Supercharged” ride arriving at Universal Orlando in 2018