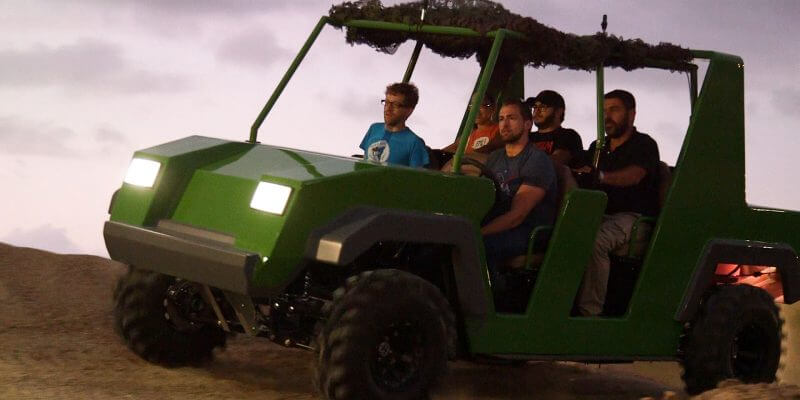 Dynamic Attractions has been a big player in the theme park industry since 1926 and today the attractions creator unveiled two innovative and futuristic rides, the Dynamic All-Terrain Dark Ride and the Dynamic Flightcycle. In addition to these two new attractions, the company also released a few details of a possible G.I. Joe attraction that ties into one of the newly released rides.

The Dynamic All-Terrain Dark Ride is a trackless, indoor/outdoor dark ride vehicle that breaks boundaries. By breaking boundaries, this attraction actually breaks them as it is completely trackless. Now this doesn’t mean that you can’t take a turn driving it. The Dynamic All-Terrain Dark Ride is the first dark ride that will allow guests to seemingly go anywhere they steer. “In the military world, they call this ‘Fly by Wire’,” explains Haimson. “However, if they come close to another vehicle, wall or obstacle, the system will safely and thematically take control.”

The Dynamic Flightcycle attraction also unveiled at today’s event is a theater type attraction similar to Avatar Flight of Passage at Pandora – The World of Avatar in Disney’s Animal Kingdom. In this attraction, passengers sit forward in a motorcycle-like racing position and are surrounded by a massive concave screen. While experiencing the attraction guests can expect different elements of wind, mist, scent, and media perfectly synchronized with the motion to create a thrilling family-level illusion of flight. Instead of sitting with their backs against a chair, riders lean into the action, with their torso-forward on a cycle-style ‘flying’ vehicle. “It’s like a motorcycle with wings,” explains Mike Haimson, VP of Technical Development, Dynamic Attractions, and the visionary of the design.

The Dynamic Flightcycle is available in a complete Attraction Package called “Dragon Rider,” which includes screen, projection, media, scenic and preshow elements.  This package tells the epic story of two kingdoms engaged in a battle with each other, and the warriors ride on the backs of dragons. Guests get to join the forces and lay siege to their enemy’s city, flying, soaring, and swooping through the towers and canyons in a medieval, other-world adventure filled with flames and action.

During the press conference, a banner was brought up which had printed on it “G.I. Joe vs. Cobra The Experience.” George Walker, Senior Vice President of Dynamic Attractions Creative Services stated that all he could say was “if you had an all-terrain dark ride that maneuvers like a jeep and can go over rough terrain… you could marry that with a story that is very militaristic in nature about heroes fighting bad guys.” He then confirmed that a concept centered around G. I. Joe was created although as of now it is very “Top secret.”

Be sure to check out the rest of our coverage of IAAPA 2017, which will be continuing throughout this week.