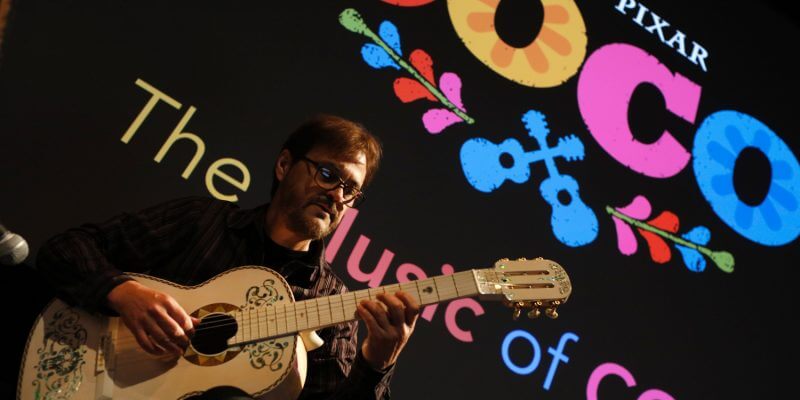 As we’ve discussed here at Inside the Magic numerous times in recent weeks, music is incredibly important to the new Disney-Pixar animated feature “Coco,” which opened this past holiday weekend to rave reviews and great success at the box office.

During my visit to Pixar‘s headquarters in Emeryville, California I attended a presentation on the music of “Coco,” during which the movie’s co-director and co-writer Adrian Molina sat down with music consultant Camilo Lara, songwriter and arranger Germaine Franco, and composer Michael Giachhino to discuss just how the music in “Coco” came together.

“‘Coco’ is a film that, moreso than any other we’ve made here at Pixar, music has been so much a crucial part of the storytelling and the story development process,” Molina began. “And as such, it’s a project where we really wanted to get talking about music really early on in the process. We’re all storytellers here, and to be able to weave music into the story from the very beginning has been really fun for us, and I think is creating really great chemistry among the artists and among the musicians.”

“Our main character Miguel, his drive in this story is to be a musician– his passion, his fuel, his desire to express his talent and express his emotions through music. And the problem is that he grows up in a family where, for historical reasons, they hold a grudge against music, and they don’t allow it. But we wanted to create a language for this character that music expressed what he wanted and drove him through the story, and we built everything around that.”

“His idol is this guy Ernesto de la Cruz, the greatest musician in all of Mexico, and when he discovers that not only does he aspire to be like this guy, but that he has a family connection to this guy, all of a sudden it sets into motion this chain of events that holds the promise of Miguel being able to really achieve his dream. And the moment he goes out to his family and he says, ‘I’ve got this connection. I’m gonna be a musician,’ everything goes horribly wrong and they put the smack down. And then it really becomes incumbent upon Miguel to prove the power of music, and to forge his way with music. And so, it’s woven throughout this entire film.”

“To create the music of “Coco,” we found that there are three different types of music that we needed to talk about. The first was source music. Miguel lives in this town of Santa Cecilia where this great musician Ernesto de la Cruz came from. As such, all of these musicians who were inspired by this guy come and they play in this plaza. We really wanted the world that Miguel lives in to be inspiring to him and to be full of music. As such, we wanted to lean very much into the broad tapestry of Mexican music, and the diversity therein. So this is music that is traditional, is played in the context of the world that inspires Miguel through his journey.” 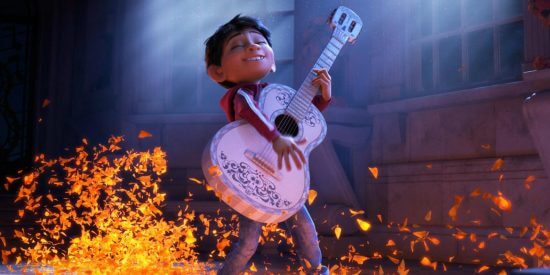 “And lastly, we knew we had the opportunity in this story to create original songs inspired very much by the different styles of music in Mexico but that, as storytellers, as writers, as artists, this became an opportunity to, in the lyrics and in the situations where original songs are performed, we could really suppport the storytelling. As filmmakers, Lee and I knew that in “Coco” there are a lot of moments that we wanted to use the music of the world to characterize somber moments or festive moments or really rowdy moments, and do that in a way that tapped into the sounds of Mexico.”

“The main goal was to create this universe, and to make it as if it was music on the street in Mexico, in a town like Santa Cecilia,” said Lara. “It was a big challenge, because the landscape in a place, in a town, in a plaza, everywhere in Mexico, you keep hearing nonstop music– all kinds of music. So we went from a wide range of genres, from Trio to Mariachi to Banda to Son. We did some sessions in Mexico recording with really amazing, very talented musicians. I think the result, you can hear it. The whole idea was to have a sonic landscape that smells like Mexico. That was the main goal.”

Germaine Franco chimed in. “We decided, in terms of the tunes that we would record, we had three different categories. We had traditional songs that you would hear throughout Mexico if you were growing up. And we also recorded some source music that Michael Giachhino wrote in the style of Mexican genres like Mariachi. And then we took some of the original songs that we worked on together– one song, “Remember Me,” the main signature song of the film– and we asked the musicians to add their own artistry to what we brought them. As far as the traditional songs, we wanted them to do it how they like to do it. We had some arrangements, but we gave them a lot of latitude. We did not ask them to just read the notes. We wanted to have them put their own spirit into it.”

Molina concluded, “What I thought was really interesting about the way we worked in the session was that a lot of the different ensembles that came to us, some of them read music, but some of them came from a practice of playing by ear and an oral tradition. It was really interesting to see how Germaine worked with all these different artists to preserve the style that they played in so it felt like [what] you would hear in the street in Mexico.”

Finally we heard from Michael Giachhino about his process in creating the movie’s orchestral score. “I came onto this project fairly early on, because we were talking about doing source music and different things for the film, but as far as the score goes… generally when I come to a film I like to watch the film. I don’t want to read a script, necessarily, because it puts different images in my head than what the directors will eventually have. So I wait until I can see a version of the film, and when I watched this film it made me very emotional. I loved what the film was saying, and I loved what the film was about.” 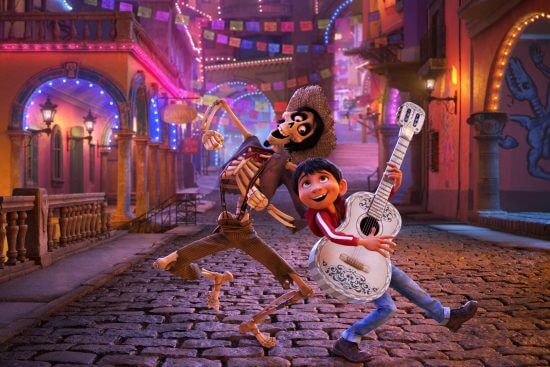 “My first exposure to Mexican music was as a kid. My dad had this crazy record collection, and there was this one album in there, ‘The Music of Mexico.’ And I remember as a kid, down in the basement, I would listen to that album over and over. And I was struck by how melodic it was, and how I could remember all these melodies. For me, it was all about ensembles playing together, and I loved the sounds. So watching this movie instantly took me back to my childhood.”

“And then having the opportunity to work with Germaine and Camilo, I learned so much more about Mexican music that went far beyond that original album that I listened to, how many different styles of music there [were]. It was incredible. With all of that, I watched the film and then ran off to just sit down and figure out, ‘What did I feel about it?’ Because the way I like to write is, watch something, try to understand how I felt, and then put that into music.” 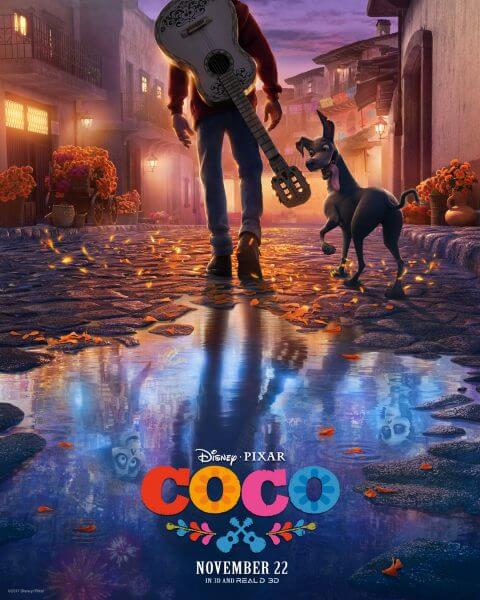