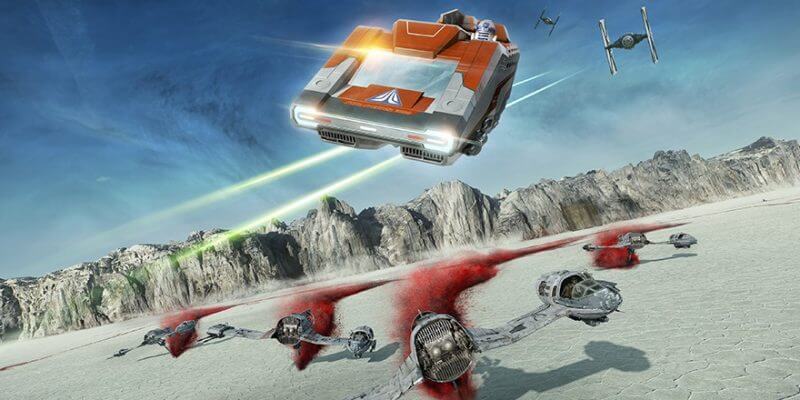 Star Tours: The Adventures Continue has been thrilling guests at Disney theme parks since it replaced the original Star Tours in 2011. And now that Disney has started making its own “Star Wars” movies, it has taken to adding scenes and planets from the new films as destinations on the ride, starting with “Star Wars: The Force Awakens” and Jakku in 2015.

Now, with the release of “Star Wars: The Last Jedi” about a month away, Star Tours will be getting another new location: the planet Crait, which plays home to the action-packed ground battle between the Resistance and the First Order in the trailers for the latest film. Today Disney released a first look at a still image from the added sequence. The official Disney Parks Blog reveal also cryptically alluded to another possible addition to Star Tours for the holiday season, adding “if you’re thinking that’s the only new Star Tours destination coming this week, all I can say is, ‘No. There is another.'” Could there be a second, unnanounced location from “The Last Jedi” coming to the popular attraction? We’ll find out before this weekend. Crait will be added as a destination to Star Tours this Friday, November 17th at Disneyland in California and Disney’s Hollywood Studios in Florida’s Walt Disney World.

Comments Off on PHOTO – First images of new Star Tours destination from “Star Wars: The Last Jedi,” hint at more to come from Disney Parks