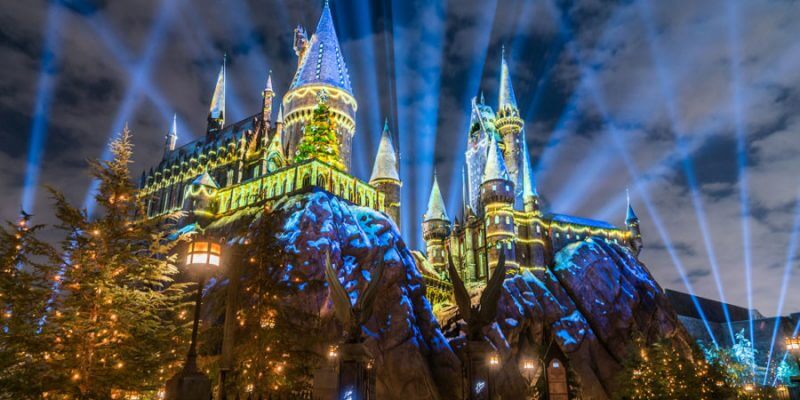 We are just a few short days away from kicking off the holiday season at Universal Orlando Resort and we are still learning new details regarding the highly anticipated “Christmas in the Wizarding World of Harry Potter.”

Universal Orlando announced several exciting pieces of information today regarding what we can expect to see in the Wizarding World this holiday season. First, over at Hogsmeade in Islands of Adventure, guests will see “The Magic of Christmas at Hogwarts Castle.” The show promises the latest in projection-mapping technology, transforming Hogwarts for the holidays.

Viewers will get to see the ghosts of Hogwarts singing carols, students riding broomsticks and creating snowmen, a moment inspired by the Yule Ball and many more surprises with several showings each evening.

Guests can also enjoy a brand new collection of holiday carols from the Hogwarts Frog Choir. Their new songs will include: Finally, over at Diagon Alley in Universal Studios Florida, guests can enjoy a special holiday show from singing sorceress Celestina Warbeck and her banshees.

The show will include four new songs from the Wizarding World star’s holiday album, “Nothin’ Like A Holiday Spell.” The new songs include: “Christmas in the Wizarding World of Harry Potter” and the rest of Universal Orlando’s Holiday Celebration begins November 18 and runs through January 6.