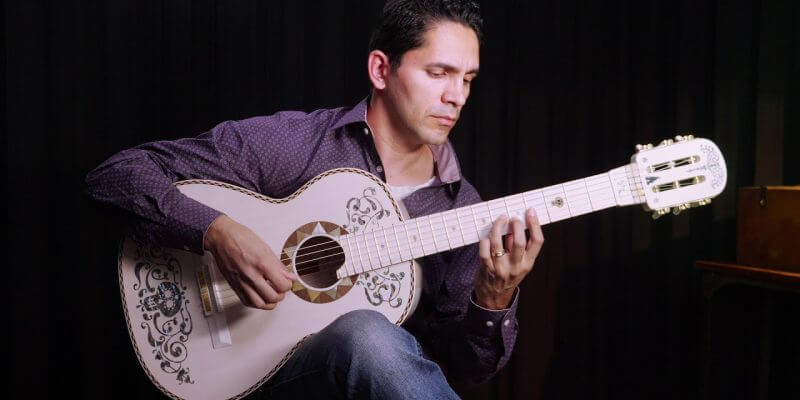 As I mentioned in my review of the film this morning, Pixar‘s latest animated feature “Coco” features some fantastic original music, including an enchanting score and a number of unforgettable songs. That’s why it makes perfect sense that the studio would choose to create a series of authentic and high-quality musical instruments as cross-promotional items in time for the release.

This week I exchanged emails with “Coco” production designer Harley Jessup, who told me about what went into the art direction of the musical instruments in the movie, and why Pixar chose to partner with Córdoba to create its tie-in guitar series Coco x Córdoba. Miguel’s passion for music is central to the story of Disney∙Pixar’s Coco. While music is forbidden in his household, it’s everywhere in the town of Santa Cecilia where Miguel lives. His love for music drives the story and as Miguel travels to the Land of the Dead he is able to finally show his talent as a musician.

The song, Remember Me, is a recurring theme in the story and we hear it played as an upbeat show-stopper and as a tender ballad. Because music is so important in Mexican culture, we tried to reflect that in the story and settings of the film. Ernesto’s skull guitar plays a very important role in the movie. 2 – Tell me about the production design of Ernesto de la Cruz’s guitar and other instruments in the movie itself.

From the beginning we knew that all the instruments in the film would need to be carefully designed and articulated to allow them to be played realistically. There are many close-ups on the guitars showing authentic finger placement based on reference of master guitarists observed by the animators.

First we see Ernesto playing his skull guitar in a spectacular flashback, then we see close-ups of Miguel playing his homemade guitar that he’s decorated to look like the skull guitar. In a talent show scene, we feature a brassy Banda-style group and even a skeleton playing a glass harp – water glasses filled at different levels – all authentically modeled and animated.

But Ernesto’s guitar is the most important instrument in the film. For its design we were inspired by the inlaid designs of 19th century Mexican guitars we saw in the collection of the Metropolitan Museum in NY. The dark mother of pearl design seemed perfect for the 1920’s period and the ivory white enamel body was bold enough to work with Ernesto’s big personality. The skull-shaped head of the guitar is the most distinctive feature of the design and it’s a key to the mystery in the story. 3 – How was Córdoba chosen to create the Coco x Córdoba guitars?  What about their quality and craftsmanship made them the right company to partner with Pixar on this project?

We met with a number of guitar companies, but we knew from the first meeting that Córdoba shared our same creative vision for this collaboration. The Córdoba team was inspired by Miguel and his story, which resonated with them as musicians and reminded them of their own personal stories.

Córdoba continues to challenge the definition of the acoustic guitar without sacrificing the authenticity of its heritage. I got to meet Tim Miklaucic, Córdoba’s founder, at the L.A. workshop of master guitar-maker German Vazquez Rubio. Tim described how he works with master luthiers (guitar makers) from all over the world to create the instruments for Córdoba. We all were excited about the idea that excellent guitars at an affordable price might inspire kids and adults to play like Miguel. These are not toy guitars, but quality instruments with great sound. 4 – Tell me about the design of the individual guitars in this series. What makes each one unique?

There are three models of the Coco x Córdoba series guitar which are currently available at Guitar Center. They have traditional headstocks with a small skull etched in the center and on the body, a laser-etched design that appears on Ernesto’s guitar in the film.

The 7/8 size is very comfortable to handle and is built with a spruce top and mahogany sides and back. Its nylon strings make it perfect for beginners and it sounds warm, clear and melodic, just like in the film. The body of the guitar has the skull design and decorative border etched into the front. There are 2 mini guitars that are also serious instruments. The Coco x Córdoba Minis are 22.8” long and come in either a light spruce top or a mahogany top. Both models have the skull design on the body of the guitar. I haven’t heard them myself, but I’m told the minis retain the playability of a full-size guitar without losing its impressively loud voice.

5 – Finally, there is a replica of the Ernesto de la Cruz guitar available as well. How did you ensure that this guitar lived up to the standards expected by collectors of authentic Disney-Pixar movie memorabilia?

We tried to help with the visual details, but the quality of the instrument was all from Córdoba. When we created  the guitar in the film, our focus was on making the skull guitar visually distinctive and iconic to support the story. We needed to be able to recognize the skull headstock clearly. Designer Ernesto Nemesio and I worked together with Director Lee Unkrich to develop the skull-themed design. Unlike the guitar-makers at Córdoba, we didn’t have to worry about how the guitar would sound  — it just needed to look fantastic!

We sent detailed pictures of the skull guitar to Córdoba and last summer we got to visit the L.A. studio of master luthier, German Vazquez Rubio, to see the first guitar in progress.The replica version of Ernesto’s guitar is a masterpiece of craftsmanship. German led the effort to make Ernesto’s guitar a reality, complete with a gorgeous abalone inlay on the front and distinctive skull-shaped headstock with delicate inlay and 24K gold detailing on the tuning mechanism.

The tuning pegs are hand-carved skulls and each detail is exquisitely executed with no compromise in sound and performance. Only 20 of these guitars are being made and it was thrilling to hear Guitarist Federico Ramos play it at the Coco Premiere. The Coco x Córdoba replica guitar sounded amazing and I just felt proud to get to be a part of its creation. For more information and links to purchase the Coco x Córdoba guitar series, be sure to visit the official Guitar Center website. “Coco” opens this Wednesday, November 22nd in theaters nationwide.