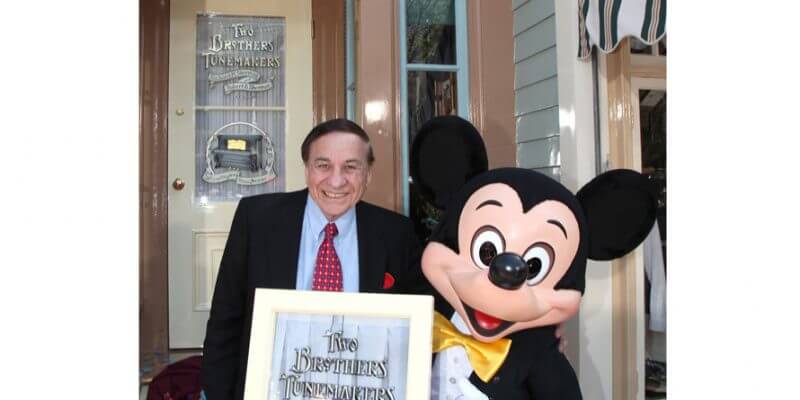 Disney Legend Richard M. Sherman has created much of Disney’s beloved and memorable music, and he was honored for his achievements during IAAPA 2017.

Sherman was inducted into the International Association of Amusement Parks and Attractions (IAAPA) Hall of Fame, which honored the legendary Disney composer and songwriter for his many contributions to Disney parks all over the world. Some of his amazing achievements are highlighted in this statement from IAAPA:

Richard M. Sherman’s contributions to the industry span more than 50 years, and he has written and composed countless beloved songs for Disney theme parks, resorts, and attractions around the world. His work represents the industry’s most iconic and memorable achievements, combining the physical ride experience with music that elevates the impact and emotional connection of an attraction — for children and adults alike. Along with his brother Robert, he wrote the timeless lyrics for “It’s a Small World,” celebrating global peace and our shared humanity. In addition, he wrote other classic songs such as “The Tiki Tiki Tiki Room,” “A Spoonful of Sugar,” and “The Winnie the Pooh Song,” to name a few. Throughout his career, Sherman has served as an influential mentor to many designers and creators at schools, universities, and workshops. His legendary work and talent for telling stories through lyrics and melodies has connected the globe, inspiring millions through the gift of music.

Comments Off on IAAPA 2017: Disney Legend Richard M. Sherman inducted into IAAPA Hall of Fame for contributions to Disney Parks