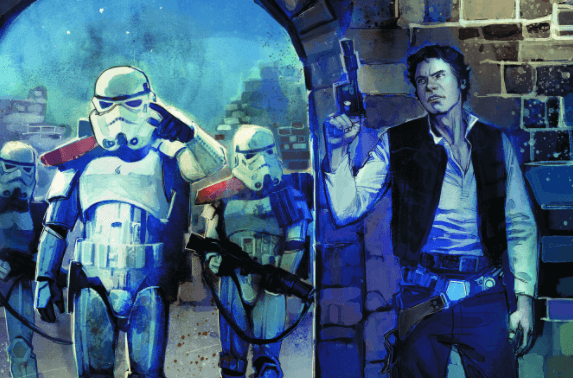 Marvel and eBay have teamed up to bring you a brand new exclusive “Star Wars 38: The Ashes of Jedha, part 1” comic with a special variant cover featuring art from popular comic book illustrator Rod Reis.

Only 3,000 copies of the new variant were created and they are expected to sell quickly as a similar special edition comic with the same number of copies sold out in just 28 hours earlier this year. The original cover for this comic, seen below, was illustrated by artist David Marquez. This issue is a part of “The Ashes of Jedha” — a new six-part miniseries within the current and ongoing Star Wars comic series.

This sale marks the first ever Star Wars-branded collectible to be exclusively sold on eBay. The comic is available now for $5.99 with free U.S. shipping. Get it here.

In celebration of the comic book release, eBay looked at the sales of the most iconic Star Wars characters ahead of the movies they were first featured in and discovered each character spiked in popularity on eBay between their trailer reveal and the first movie they appeared in. They also came across some interesting numbers regarding the merchandise based on those characters:

• Since the new character was announced Porg has been searched for over 27,000 times, and there are over 11,000 Porg items currently listed.
• Preceding Star Wars: The Force Awakens, BB-8 was searched for almost 82,000 times, and almost half a million BB-8 products were listed ahead of the movie.
• Ahead of Star Wars: Episode I – The Phantom Menace, Jar Jar Binks was searched for close to 11,000 times, and almost 80,000 Jar Jar Binks items were listed within the timeframe.
• The most expensive Star Wars item ever sold on eBay was a 1983 Kenner Star Wars Prototype ROTJ Red Cape Bib Fortuna Action Figure, which sold for $38,000.

Comments Off on Exclusive “Star Wars 38: The Ashes of Jedha” comic with special variant cover available now on eBay