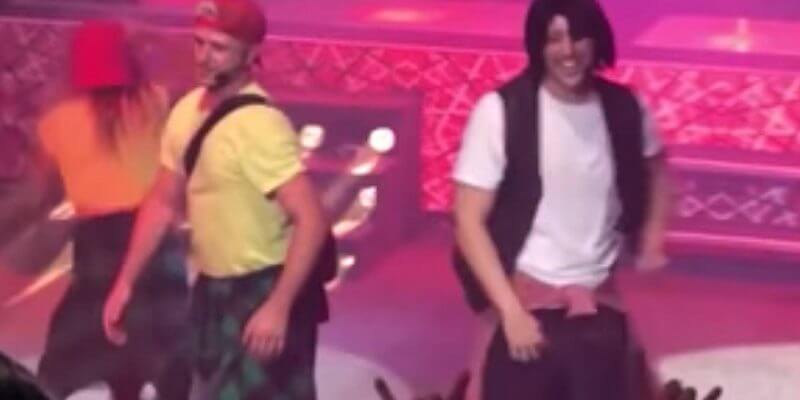 After 26 years of parody and pop culture related comedy, Bill and Ted’s Excellent Halloween Adventure has said its final farewell as Halloween Horror Nights 2017 at Universal Orlando comes to a close for the season.

The popular comedy show, which played at the nighttime Universal Studios Halloween event closed its curtain on audiences for one last time – with plenty of surprises.

While, as usual, filming was not allowed during the performance itself, we captured the excited fans leading into the show as well as the final goodbye moment. The Bill and Ted characters were from the popular 1989 film “Bill and Ted’s Excellent Adventure,” which originally starred Keanu Reeves and Alex Winter. Perspective audience members enjoyed the hilarity of the show, which included funny and current pop culture oriented jokes, skits, profane language and of course everyone’s favorite, the attractive dancers. The show used to attract fans at the event who would wait in massive lines to see the show and now it is no more.

Back in August, Universal Orlando had announced that the 2017 edition would be the “farewell tour” of “Bill & Ted.” As part of the announcement, fans of the show were told that this year’s show would be the last.

In order to get admittance to the special final show, guests had to be lined up in Springfield earlier in the day. Some guests had tweeted that they had been in line from as early as 2:00 PM that afternoon. The wristband guaranteed guests entrance to the show. The line spanned the entire length of the Springfield section of the park and was packed with eager guests hoping to secure their spot. The finale show began with the entire audience pouring into the Fear Factor stadium, eagerly waiting for the event to begin. Once the show started the entire audience rose to their feet, cheering and clapping to the opening video. When Bill and Ted came out, this excitement only grew as claps grew into screams and cheers and this part of the show also contained the longest standing ovation. As the show continued, each new star to walk on the stage was met with another standing ovation and chants of that character’s name. The actress playing Sean Spicer’s character got confused at one point due to all of the crowd’s interactions with the cast, saying “I don’t know where we’re at.” Throughout the show the cast members would break character, laughing in between different acts and goofing off with the crowd. There was also a good amount of ad lib thrown into different parts of the show.

The show also contained special guest appearances from past shows. One small cameo was from Dr. Emmett Brown, from the popular “Back to the Future” film series. This special finale show also included a larger formed Elsa from “Frozen” singing a number from a show a few years back about snow cones.

Another guest to grace the stage, who really got a reaction out of the crowd was Dr. Evil from “Austin Powers,” who was originally featured in the Bill and Ted’s show back in 2006. Dr. Evil hilariously brought up now closed attractions that had “disappeared in the time he was gone.” This list included Beetle Juice, Back to the Future, Dueling Dragons and many other now closed attractions. The show then grew toward the end and Bill and Ted took the time to thank the crowd for “26 outstanding years,” thanks to the audiences who came back every year to see them. This was when one last special guest came on the stage, a special cast member from back when the show first premiered at Halloween Horror nights, Rufus. He came out and gave Bill and Ted a hug and helped them end the show with the final message of “Be excellent to each other and party on dudes!”