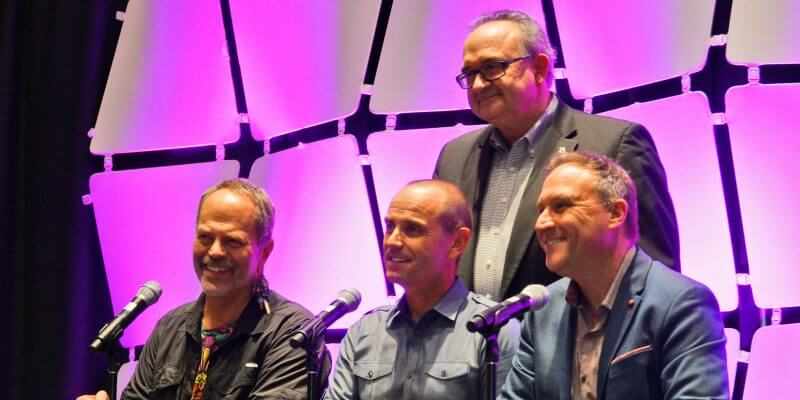 Disney fans are quick to call favorite attractions like Pirates of the Caribbean and The Haunted Mansion “classics,” often longing for days before Pixar, Marvel, and Star Wars became attached to practically every new attraction these days.

But featuring intellectual properties in theme parks is certainly nothing new. It’s easy to forget that when Disneyland was originally built, it was used heavily to promote upcoming Disney films, beginning with arguably the biggest promotion of all: Sleeping Beauty Castle. After all, while Disneyland opened in 1955 with this iconic castle as its centerpiece, it would be four more years before “Sleeping Beauty” opened in theaters.

Today, Disney and Universal lead the theme park industry, regularly opening new attractions based on the box office’s most popular franchises. But building a successful attraction based on an IP is never as simple as slapping “Star Wars” on the marquee. At the recent 2017 IAAPA Expo in Orlando, Florida, three top theme park designers gathered on a panel to discuss the good, the bad, and the hilarious when integrating intellectual properties into the parks.

It all began with a touching tribute to the late Marty Sklar, a longtime Walt Disney Imagineer and an 18-year veteran of the IAAPA Legends panel. From there, Rogers asked the panel intelligent questions about working with intellectual properties in the theme park industry.

When first considering a movie-based IP for theme parks, the panel agreed that the focus needed to shift. A film, Rohde explained, is a third-person narrative while a theme park attraction is a first-person narrative. That is, guests are the protagonist of theme park experiences. It’s a vastly different approach to storytelling.

A successful use of intellectual property in a theme park, according to Trowbridge, is not to replicate what’s on screen but rather take the “DNA” of the film and reformat it. As Coup put it, referring to the translation of the “Harry Potter” series to Universal’s parks, “It’s almost like we’ve added a few new pages [to the books].”

But storytelling is still at the medium’s heart. “I’m not personally as invested in this space race of effects,” said Rohde. When designing any attractions, IP-based or otherwise, Rohde looks for beauty, places guests can belong, and an environment complex enough to hold attention and offer surprises. In the face of ever-advancing consumer entertainment technology, Coup expects theme park attractions to offer something new. “You can have VR or AR at home. We have an entire world,” added Coup.

The trio offered a few tips for working with (aka “dealing with”) IP holders. First and foremost, the relationship must be approached as a collaboration, according to Trowbridge. While licensor/licensee relationships certainly exist, they won’t prove to be as fruitful in growing the IP’s fiction. Simply putting a Batman logo on a roller coaster does not make an emotional connection with guests. It’s simply a marketing tactic. “A collaborator will extend these stories or relationship with the world or characters,” said Trowbridge.

The group agreed that egos have no part in such a collaboration. Both sides have to listen to each other. In the case of “Harry Potter” and “Transformers” at Universal, Coup noted that JK Rowling and Michael Bay both asked for elements that he initially thought was not possible in a theme park. Small stores and no marquee signs were Rowling’s requirements for the Wizarding World of Harry Potter. Bay wanted a slow motion moment in Transformers – The Ride 3D. Both were challenges, but ultimately successful ones.

But not all requests can be honored. Rohde cited numerous times when IP holders wanted too much dialogue for characters in a ride, who normally have a mere few seconds to deliver a line or two before the vehicle moves on. Likewise, Rohde’s team on Guardians of the Galaxy – Mission: BREAKOUT! talked in circles about the scale of Baby Groot, who is just a few inches tall in the movie but had to be made much taller to be able to be seen from 20 feet away in the ride.

Coup remembered going far down the design approval process for Harry Potter and the Escape from Gringotts, but having to go back to JK Rowling and almost start over when they realized they were leaving out what should have been the obvious big battle between Harry Potter and Voldemort. They had to get her permission to bend the fiction to fit the ride. On Skull Island: Reign of Kong, Peter Jackson originally wanted more than 20 minutes of ride time on Skull Island. Universal had to talk him down to 90 seconds, which was a significant challenge for someone so used to making 3+ hour movies.

Rohde and Trowbridge praised world building over referential design. That is, when integrating an IP into an attraction, don’t just mention familiar characters or settings but actually create those and elaborate on them, offering surprises. “You have to surprise them. You get a very short burn on expectation,” said Rohde. When selecting an IP to work with – big or small – Rohde noted that one that is purely character-based leaves little to work with. It needs to be a story that has the potential for world building. If the focus is on specific characters and their relationships, there really is only one story to tell and audiences have already seen it.

Trowbridge added that it’s most important to figure out why using an IP is a good idea. Is it for marketing, an attendance boost, to grow an audience, or something else? If there is no “why” then there is no point in bringing in an IP. Coup added that IPs can be “trip drivers” – anchor points on which guests are willing to book a trip specifically to see that particular franchise, but then will enjoy the rest of the attractions offered within a park. Star Wars, Harry Potter, and Nintendo were offered as (obvious) examples of “trip drivers.”

When asked specifically about the upcoming Star Wars Galaxy’s Edge attractions coming to Walt Disney World and Disneyland, Trowbridge had nothing new to reveal. Relevant to the conversation, he emphasized that guests will certainly be the stars of the new experiences. “We will extend the universe with a story starring you,” he said. And about that upcoming Star Wars hotel with multi-day experiences, he only described it as, “An invitation to engage, invitation to play.”

Rounding down the panel, all three designers were asked to cite some of their own design influences and what they study to further their craft.

Coup said he attends TED conferences, not so much for the talks but more for the discussions, after-sessions, and fascinating conversations on science, art, and politics. He likes to travel and explore. And his biggest inspiration is Leonardo da Vinci’s ability to combine art and engineering.

Trowbridge’s biggest study is theme park guests. “We design these experiences to be shared,” he said. He learns a lot from watching how guests interact with what he’s worked on.

Rohde is a self-proclaimed academic when it comes to theme park design, which he strongly considers to be an art form unto itself. “If you’re going to call yourself a professional, it’s not about your opinion. It’s about your library.” He emphasized the importance of research and reading, learning from thousands of years of history and classical design. He even offered a “syllabus” handout for everyone attending the panel with seven reading recommendations. The final question of the panel was one that grabbed everyone’s attention. The designers were asked to praise each other’s companies. That is, Rohde and Trowbridge had to say something nice about Universal’s way of creating attractions while Coup had to offer kind words about Disney. Given that Trowbridge formerly worked for Universal Creative and Coup for Walt Disney Imagineering, the question was certainly an interesting one. Their answers can be found in the video excerpt below.

In short, both Rohde and Trowbridge praised Universal’s ability to design and build new attractions in lightning speed, admitting that Disney can be more than a little sluggish to get things off the ground due to many layers of corporate approvals needed. From his time working at Disney, Coup missed the decades of leadership and support he found from longtime Imagineers. Universal Creative hasn’t been around long enough to have established that history of talent just yet.

In the end, the question of whether IPs were good or bad for the bigger picture of theme parks was never quite asked or answered. These three designers firmly believe that there is almost no difference in creating “original” attractions versus “IP” attractions. In either case, they give each the most creative attention they can offer with the hopes that guests can become lost in the worlds they have created. Comments Off on Battle of IPs: Disney, Universal designers reveal the good, the bad, and the hilarious of using big name franchises in theme parks