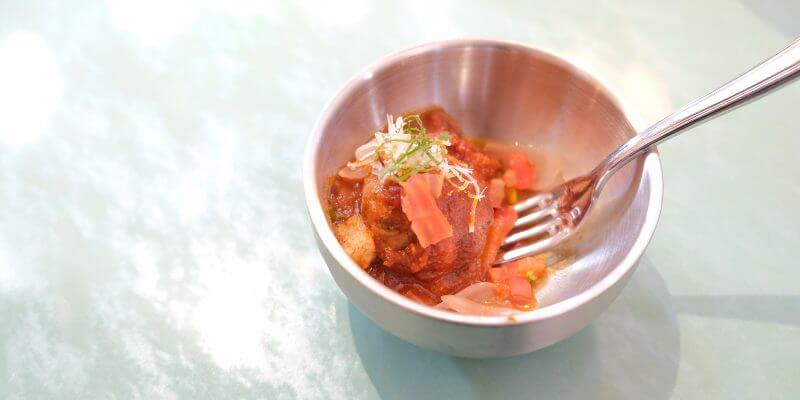 Walt Disney World’s Swan and Dolphin Resort recently received a massive renovation and upgrades to its Dolphin lobby, located within the Dolphin side of the resort, which now features a brand new high-end bar and grab-and-go dining venue.

Phins, the brand new bar located in the newly renovated Dolphin Lobby  itself, is a lot to take in. Even though it only takes up a small portion of the refinished lobby, its finishes and look are quite enticing. Phins overall look and feel appears expensive and high-end and when you sit down at one of the bar’s stools, you immediately feel a feeling of exclusivity and importance.

Phins bar not only serves specialty cocktails, beers and wines but also an assortment of appetizers and dishes as well. The Lamb Meatballs, made with Spanish inspired braised lamb meatballs and served with pork tomato sauce, roasted potatoes and manchego cheese, were delicious. The meatballs were full of flavor and the pairing of the potatoes and cheese really complemented it. Another offering from the restaurant, the Smoked Chicken Wings, made with a teriyaki glaze, and a cilantro-lime dipping sauce is nice take on wings. The teriyaki glaze gave the chicken wing nice flavoring and when you dipped the wing in the cilantro-lime sauce you were left with a delicious piece of meat. This is definitely a nice option for those who don’t like to go crazy at the bar with too fancy of foods, especially if you are looking for something more simple with a little edge. The Pork Belly Bao is made from a combination of chile and garlic flavored pork belly, pickled carrots, cucumber and hoisin, all encompassed in a steamed bun. The bun was very doughy and I didn’t particularly enjoy this item as much as some of the others, but the meat and its pairings within the bun were still tasty by themselves. The bun just seemed to overwhelm the rest of the dish. The alcohol at this bar doesn’t only flow but it smokes as well. Pictured below, the Smoke N’ Roses is a cocktail created with Four Roses small batch bourbon, bliss maple syrup, Amarena cherry juice and fresh lemon. The special drink is actually served in an old fashioned smoke box, which is used with a cold smoker to infuse smoke within the box right before it is served. This was not only a tasty drink but it was also exciting as the drink is served to you within the box. They even open the box in front of you to release all of the smoke before you try it. Other drinks that the bar offers include the 1565 Tiki and Phin’s own Phins & Feathers pale ale. The 1565 Tiki is made with St. Augustine Rum, malibu, orange juice, pineapple juice, vanilla syrup, grenadine and Myer’s dark rum float. This was one of the more refreshing drinks of the night as it wasn’t overly sweet or bitter. In celebration of the grand opening of Phins bar, a few hotel executives came out to say a few words about the new bar. Fred Sawyers, General Manager of the Walt Disney World Swan and Dolphin Hotel discussed the old lobby and some of the work that had gone into the new renovation. Then, Tony Porcellini, Director of Food and Beverage at Walt Disney World Swan and Dolphin came out and spoke of his excitement and happiness looking toward the future of the new bar and quick service restaurant. After the speeches, Porcellini climbed on top of the Phins bar and popped open a bottle of champagne with a sword. Screams and laughter filled the air as Porcellini swiftly cut off the top of the bottle, sending champagne spewing into the air and onto the bar. On the other side of the newly renovated Dolphin lobby, located within the Dolphin side of the Swan and Dolphin Resort is Fuel, the brand new high-quality quick service dining venue, which features grab-and-go food and drink options for breakfast, lunch and dinner.

WATCH – INSIDE LOOK AT THE NEW FUEL DINING VENUE: After entering the restaurant you are immediately taken back by its cool and relaxed vibe. The restaurant has the ease of a gas station convenience store but the atmosphere of a hipster coffee shop.

Breakfast options include pastries from world-champion pastry chef Laurent Branlard, muffins, breakfast sandwiches, and wraps. Other options for breakfast include a wide variety of coffee, tea and espresso options. Lunch and dinner options include sandwiches and salads. All of which are pre-made and ready-to-go the second you walk in the restaurant.