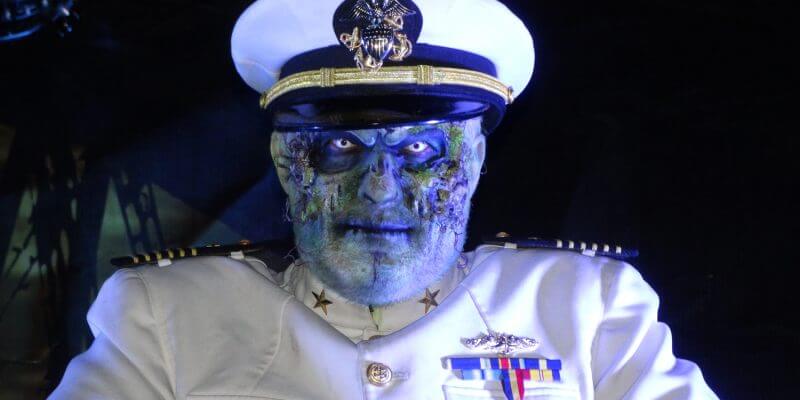 Something is lurking in Long Beach Harbor. An infestation of ghouls, demons, and monsters is overrunning the world-famous RMS Queen Mary ocean liner, and you’re invited to step aboard to witness them for yourself…

For years now the annual Dark Harbor Halloween event has been held on The Queen Mary’s grounds, and the 2017 iteration may be the strongest one yet. Now featuring four full mazes inside the ship itself (and three more on the adjacent grounds), Dark Harbor offers a full evening’s worth of activities for Southern California haunt fans that is coming close to rivaling similar local theme park attractions.


Dark Harbor new maze for this year is called “Feast,” and takes place in the bow of the ship, in and around creepy kitchens serving all manner of disgusting cuisine, most of it made from human remains.


Beyond the seven mazes (which include the returning “Intrepid,” “Circus,” “DeadRise,” “Lullaby,” “Soulmate,” and “B340”) The Queen Mary also plays host to spirited live entertainment and an unforgettably eerie atmosphere during this time of year.


All told, the overall experience of Dark Harbor has been steadily improving since it first began in 2013. Despite the loss of access to the Queen Mary Dome, the mazes, activities, entertainment, and dining options are all are plentiful and well spaced-out in the event’s new footprint. Anyone seeking a frightfully good time for Halloween is bound to find it at Dark Harbor.

The Queen Mary’s Dark Harbor runs from now through November 1st in Long Beach, California. Be sure to visit the event’s official website for more information and advance ticketing resources.