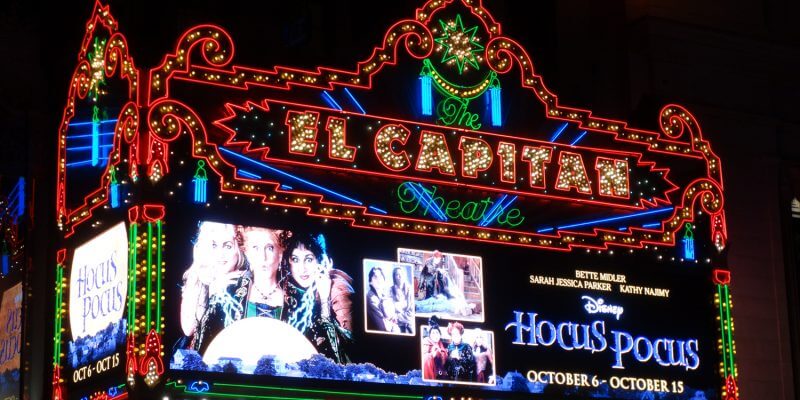 In the twenty-four years since its 1993 release, the Disney Halloween family film “Hocus Pocus” has accumulated a massive, passionate cult following. Around the country, fans flock to revival screenings of the holiday hit, and nowhere is that more true than in Hollywood, California.

This week at Disney’s flagship movie palace the El Capitan Theatre on Hollywood Boulevard in the heart of the Los Angeles tourist district, “Hocus Pocus” has found a home for a sizable chunk of the Halloween season. I visited the theater on opening night this past Friday evening and spoke with “High School Musical” director Kenny Ortega (who introduced the film alongside his composer John Debney) about the life and legacy of “Hocus Pocus.”


During my backstage interviews with Ortega and Debney, both mention unprompted that they would love to return for a “Hocus Pocus” sequel with the original cast.


On the lower level of El Capitan, the management has assembled a dazzling collection of actual screen-used props and costumes from “Hocus Pocus” and another popular Disney Halloween movie “The Nightmare Before Christmas,” which plays at the theater later in the month.


“Hocus Pocus” runs now through Sunday, October 15th at El Capitan, followed by “The Nightmare Before Christmas” in 4D from October 20th through the 31st. Be sure to visit the theater’s official website for more information and advance ticketing resources.