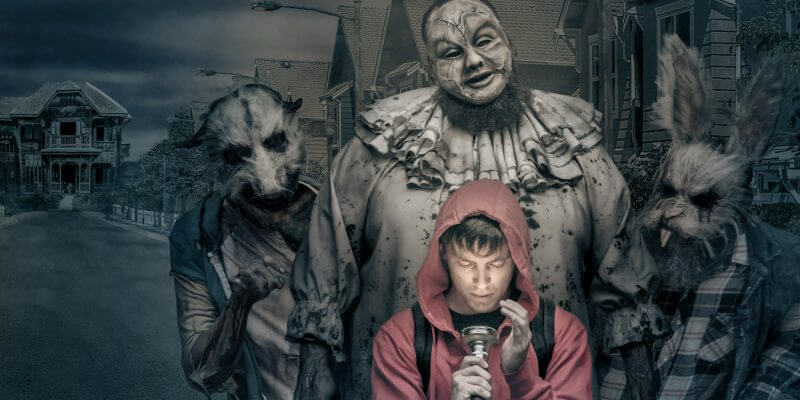 Having made its debut during the Halloween season of 2012, “Trick or Treat” is currently the oldest running maze at Knott’s Scary Farm, where new walk-through attractions tend to rotate out every couple years or so. It being a fan favorite, the designers at Knott’s were hesitant to remove it this time around. But what about the possibility of adding something new?

That’s where the Gantom Lighting & Controls company came in. Their Gantom Torch technology– essentially a show-operated flashlight handed out at the entrance– breathes new life into the six-season-old maze, now called “Trick or Treat: Lights Out.” The torch gives guests a more active role in deciding what they see and when, not to mention triggering a variety of special effects when pointed at certain spots.


“The flashlights both receive and transmit IR, allowing each guest’s experience in the maze to change based on where they point the beam of light,” said Knott’s in a statement. “The combination of a maze, total darkness, and the flashlight are what make Trick or Treat the expedition into the horror that it is.”

I’ve personally experienced “Trick or Treat: Lights Out” several times this Halloween season, and I have to say it’s an effective way to punch up a tried-and-true attraction. I’d love to see this kind of interactive technology implemented into more attractions at Knott’s and beyond. And the minds behind the Gantom Torch seem to think that’s a definite possibility.

“The Torch technology can be incorporated into a theme park on many different levels—from a drop-in product that rides over existing themeing without any integration to something that’s fully integrated with the environment,” said Quan Gan, Founder of Gantom. “What you see at Knott’s is only one iteration of that, one manifestation of a guest walking through a scene and being able to trigger effects.”

It’s an exciting time for the themed entertainment industry, and not just during Halloween season. Fans of theme parks and immersive entertainment as a whole should be very interested to see what the future holds for this kind of technology. Comments Off on VIDEO: Behind the Screams of “Trick or Treat: Lights Out” Interactive Haunt Maze at Knott’s Scary Farm