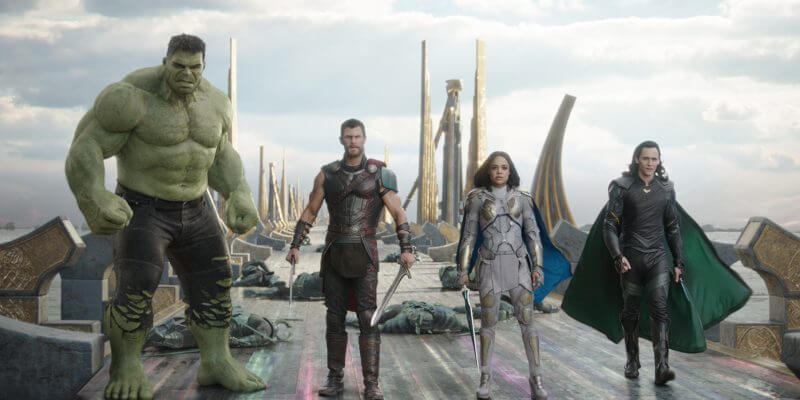 With a 66% positive rating on Rotten Tomatoes, the 2013 superhero sequel “Thor: The Dark World” currently holds the honor of being the most poorly-received movie in the Marvel Cinematic Universe. For that reason alone (the movie fared about average at the box office) it makes perfect sense that Marvel Studios would want to shake things up in Thor‘s third solo outing.

“Thor: Ragnarok,” the 17th entry in the juggernaut MCU film series, is a different animal entirely. Gone is murky, somber director Alan Taylor and in his place is the sprightly Taika Waititi– the New Zealand-native filmmaker behind the hilarious vampire mockumentary “What We Do in the Shadows” and the acclaimed Kiwi dramedy “Hunt for the Wilderpeople.”

Also absent is Natalie Portman, whose Jane Foster character has apparently dumped (or been dumped by) the titular Norse God of Thunder between movies. This time Thor (Chris Hemsworth, reprising his brawny role for the fifth time) begins his adventure as a free agent, away from The Avengers, traveling the cosmos in search of meaning.

Along the way he discovers that his home world– the mythical plane of Asgard– is in jeopardy from a long-prophesized armageddon brought about by the return of the mysteriously wicked Hela (the never-less-than-amazing Cate Blanchett, having a better time than probably should be allowed on-screen).

Thor and his trickster brother Loki (fan-favorite Tom Hiddleston) are exiled to the planet Sakaar, where the former is enlisted as a gladiator opposite Earthly teammate The Incredible Hulk (Mark Ruffalo, in dual roles as the big angry green guy and his Dr. Jekyll, the timid genius Bruce Banner.) The two duke it out no-holds-barred in a clamorous arena battle that serves as a centerpiece for the film’s energetic action.

Talented actress Tessa Thompson (“Creed,” “Selma”) joins the usual cast as the industrious but downtrodden outcast Valkyrie, and fortunately the character is never reduced to simply a love interest or token sidekick. Valkyrie’s task is rediscovering herself and reclaiming her own birthright, running parallel to Thor’s mission in the larger story.

Jeff Goldblum pops up in a supporting role as the whimsical Grandmaster, who rules over Sakaar and its combatants with a flippant smarter-than-everyone attitude, and his presence is a welcome one. This character is the brother of Benecio del Toro’s Collector from “Guardians of the Galaxy,” and it’s apt to have that relationship exist between the two Marvel franchises. “Thor: Ragnarok” owes a lot to the spirited tone and irreverent sense of humor that writer/director James Gunn has brought to both “Guardians” films so far.

This outing is a lot more fun than “The Dark World,” and though Waititi leans on the laugh button just a tiny bit too often, the gags and general playfulness fit in well as a contrast to Asgard’s deadly-serious apocalyptic stakes. Hemsworth in particular is a natural comedian, and his take on Thor’s naive do-gooder-ness gets dialed up to near-caricature, but never so far that it stops working.

The film also contains one or two cameo appearances from other MCU regulars (and relative newcomers) that I won’t ruin here, other than to say that I’ve come to appreciate how fleshed out this universe feels. It’s sort of nice to know (in a small-world Marvel Comics kind of way) that Thor can’t quite go off on his own exploits without seeing a few familiar superhuman faces, be they friends or rivals.

There are people who will watch “Thor: Ragnarok” and complain that the new approach is too light-hearted, that the movie leans too heavily on its director’s comedy chops as a crutch (Taika also provided the voice of my favorite character in the film, who originated in the “Planet Hulk” Marvel run, and I guarantee he’ll be a love-it-or-hate-it part of the proceedings.) But I think Marvel has proven over the past decade that it’s easier to take the dramatic elements of these stories seriously when their surrounding universe is approached with a breezy touch.