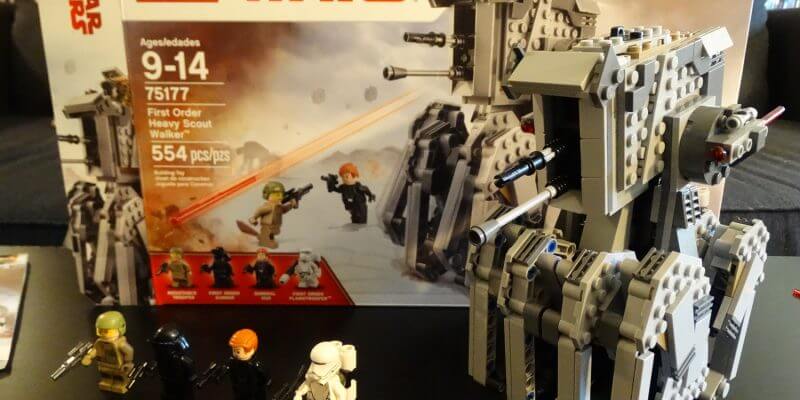 Prepare for a ground assault! The LEGO “Star Wars: The Last Jedi” First Order Heavy Scout Walker was released on Force Friday last month, but we received a review copy this week as a suggested gift guide item for the upcoming holiday season.

Set #75177, the First Order Heavy Scout Walker comes with 554 pieces and assembles into one of the coolest action-oriented Star Wars sets I’ve seen since LEGO first obtained the license from Lucasfilm nearly two decades ago. The walker resembles a spider, and it turns out that once it’s built, it also moves like one! Let’s hope the Resistance is on its guard, because with eight separate legs operated by a complex mechanical system under the hull, this is one impressive vehicle.

Today I sat down with the very cool-looking set, unboxed, built, and reviewed it on Inside the Magic’s YouTube channel.


The Scout Walker also includes four LEGO minifigures: the First Order Flametrooper, General Hux, First Order Gunner, and a Resistance Trooper. The cockpit canopy opens to sit two figures, and the laser weapons on either side both fire projectiles. The set is also impressively detailed and fits right in with other First Order sets, helping Star Wars fans build their massive armies.

Though we haven’t seen this particular vehicle in action yet, based on how neat the LEGO set is, the First Order Heavy Assault Scout Walker is sure to make quite an impression on the big screen when “Star Wars: The Last Jedi” hits theaters on December 15th.

The set is available for purchase now at the link below.