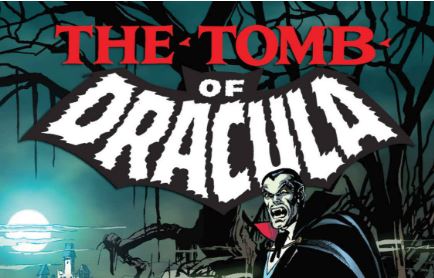 “Sink your teeth into a vampiric volume that chronicles some of the greatest supernatural comics ever printed! The all-time classic Tomb of Dracula ushered in Marvel’s glorious age of horror, while the black-and-white magazine Dracula Lives! delivered stories with real bite – and both featured legendary creators, including Gene Colan in his prime illustrating the Lord of Vampires! The tomb has opened, and Dracula lives again! But his descendant, Frank Drake, joins vampire hunters including Rachel Van Helsing and Quincy Harker in a bid to return him to his grave! Will they drive a stake through Dracula’s heart – or will that honor fall to Blade? Plus tales of terror from across Dracula’s 500-year existence, featuring Hell-Crawlers, the Monster of the Moors, wizards, gargoyles, voodoo queens and more!” –Amazon “Tomb of Dracula: The Complete Collection Vol 1” is available on Amazon for$25.33 “The Monster of Frankenstein Vol. 1”

“Gothic horror in the macabre Marvelmanner! One of the most terrifying fi gures in all of fi ction lurches into his own 1970s comic book series, collected in color for the very fi rst time. Witness a dramatic retelling of Mary Shelley’s literary classic, then follow the Monster in his quest for the last living descendant of his creator, Victor Frankenstein. It’s an odyssey that will lead him into a confrontation with Marvel’s other groovy ghoulies, Dracula and Werewolf By Night!” –Amazon “Jack Russell stars in tales to make you howl, as Marvel’s very own Werewolf! Learn how Jack became one of the grooviest ghoulies of the seventies in this classic collection of his earliest adventures! Afflicted with his family’s curse, Jack’s on a search for answers – could they lie in the terrible tome known as the Darkhold? But Jack’s quest is fraught with danger -from mad monks to big game hunters to a traveling freak show! Then there’s the terror of Tatterdemalion, the horror of Hangman and the torment of Taboo! But few encounters can compare with Krogg, the lurker from beyond – except, maybe, a Marvel Team-Up with Spider-Man…and a supernatural showdown with Dracula himself!” –Amazon Comments Off on Retro Retail: Classic Monsters of Marvel Comics