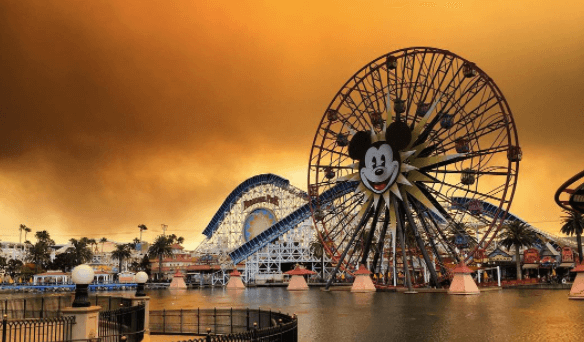 As wildfires have been blazing through Northern California since Sunday night, another fire broke out in the Anaheim Hills of Southern California on Monday morning. Smoke and haze are clearly visible around Disneyland, turning the sky an eerie shade of orange.

Visitors shared photos on social media and reported ash falling throughout the park.

Smoke from the Southern Cal #canyonfire 2 wildfire can be seen over the Haunted Mansion at Disneyland #Anaheim #fox10phoenix pic.twitter.com/Ox0O9PHrUG

Disneyland remains open, but some entertainment has been canceled.

ENTERTAINMENT UPDATE: Due to wind conditions continuing into this evening, "Remember…Dreams Come True" Fireworks, has been canceled.

For up-to-date park hours and information, visit the Disneyland website.

Comments Off on PHOTOS: Disneyland surrounded by eerie orange sky in images shared by park guests