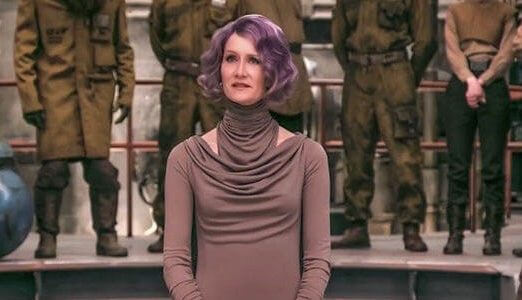 While we got a first look at Laura Dern’s Vice Admiral Amilyn Holdo in Vanity Fair earlier this year, her character was absent from the recent trailer.

To remedy that, Dern shared a new photo of herself as Amilyn Holdo ahead of her appearance on “The Ellen DeGeneres Show” this week. In this image, violet-haired Holdo is surrounded by Resistance soldiers and a BB-8 unit.

Excited to talk a little Star Wars with my buddy @theellenshow today!!

Dern didn’t share many secrets about her character with Ellen, but she did express her excitement about being part of the film.

Vice Admiral Amilyn Holdo is one of the several new characters in “The Last Jedi,” including DJ (Benicio del Toro) and Rose (Kelly Marie Tran).