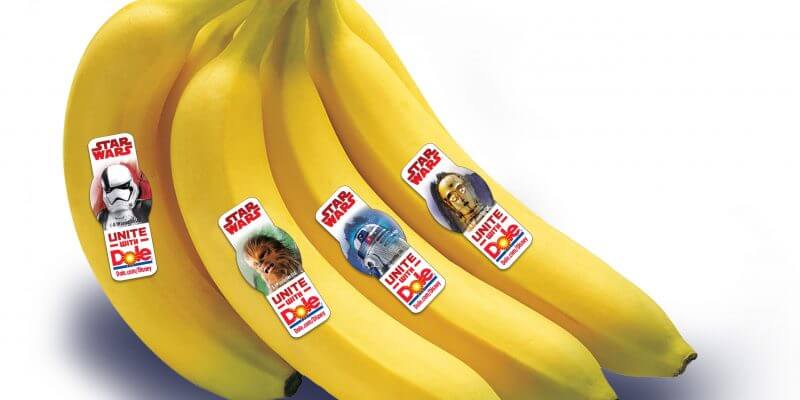 Disney and Dole Food Company have had a long and fruitful (no pun intended) relationship thanks to the presence of the pineapple-flavored soft-serve dessert Dole Whip in the company’s American theme parks and resorts. Now Dole is collaborating with the Disney-owned movie studio Lucasfilm to bring “Star Wars” together with its assortment of healthy fruits and vegetables.

Expect to see packaging on Dole products (including bananas, pineapples, strawberries, blueberries, and even cauliflower) representing characters and imagery for the upcoming film “Star Wars: The Last Jedi” popping up soon in both American and Canadian supermarkets. In addition to the attractive new labels, Dole and Disney are partnering to launch the “Unite for a Healthy Galaxy” campaign, encouraging families to eat better across an 18-week initiative by suggesting twelve original “Star Wars”-inspired recipes (easily made from Dole products, of course) which will become available to the public starting the week of October 9th. Fans should also look out for the “Unite for a Healthy Galaxy Sweepstakes,” in which grocery shoppers can scan Dole products, collect various “The Last Jedi” content, and enter to win a remote-controlled BB-8 or “Star Wars” figurines. After it launches this Sunday, Dole’s “Unite for a Healthy Galaxy” promotion will run through mid-February. Be sure to visit the company’s official website for more information.