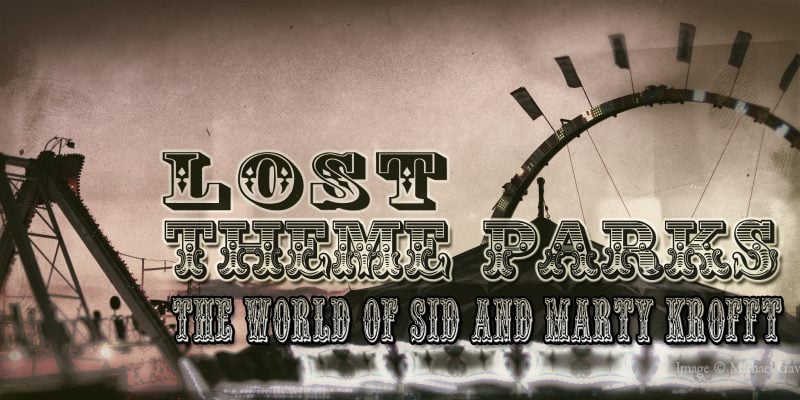 “Elektra Woman and Dyna Girl,” “Land of the Lost,” “Far Out Space Nuts,” “H.R. Puffinstuff,” “Liddsvillle,” “Sigmund and the Sea Monsters,” “Wonderbug,” and “Dr. Shrinker” – if you recognize any of these blasts from the past there’s a good chance you are child of the seventies.

Sid and Marty Krofft dominated 1970s Saturday morning programming.  Their foray into the realm of theme parks, however, did not do as well.  For a mere six months Atlanta was home to The World of Sid and Marty Krofft, an indoor amusement park (1976). WATCH – the opening to “The Krofft Supershow” – parts of which were filmed at The World of Sid and Marty Krofft:

The World of Sid and Marty Krofft was not the first foray into amusements for the Krofft brothers.  While many recognize “H.R. Puffnstuff” from the 1969 television series, he actually first debuted at the 1968 World’s Fair.  The character was created for Coca-Cola and later adapted for the TV series.  Of note, according MeTV, McDonald’s lost a lawsuit due their McDonaldland TV commercials appearing too much like the Puffinstuff series. The Krofft World theme park found its home in the Omni International of downtown Atlanta, GA.  Guests would enter via the world’s longest freestanding escalator to the top floor of the indoor amusement park.  From there several levels of entertainment awaited. At the top of the escalator, which carried guests up 8 stories, the adventure would begin. This top most level served as the admission area.  After paying the $5.75 admission and obtaining a ticket book allowing for one attraction in each area, guests would make their way down to the various themed levels below. These levels included a circus/carnival level (on several floors), the “Tranquility Terrace” with its crystal carousel and stage featuring Krofft characters, the Uptown level, featuring a pinball machine ride; Lidsville level with hat shaped buildings and a Krofft style musical show; and the “Living Island Adventure” forest themed area on the final level.  The ground floor was reserved for a skating rink. Attractions included a large crystal-like carousel where whales and unicorns offered guests a ride. On the Uptown level, “the Great Pinball Machine Ride,” a dark ride that ushered guests through a giant robot operated, life-sized pinball machine (in pinball shaped ride vehicles) – to exit into an arcade.  After descending to an “underground” level via the mineshaft, guests were whisked away to the magical realm of H.R. Puffnstuff, complete with an antagonizing Witchiepoo hounding guests as they rode the attraction.  The same level also featured the creepy Heavenly Slumber Cemetery which was home to celerity look-alike talking mushrooms. When the park opened in May 1976, to much hoopla, celebrities and dignitaries delighted in the new downtown amusement park and the crowds soon followed.  However, due to the location (Atlanta had not yet achieved the inviting atmosphere it enjoys today) and competition from nearby Six Flags over Georgia, the park barely managed to achieve even half of its daily capacity.  Over a period of just six months, barely 300,000 visitors in total visited the Krofft World park, which was designed to see twice that many daily. The Omni Center was eventually sold to Ted Turner in 1987.  CNN was moved to the location and still calls the former amusement park its headquarters.  The record-breaking escalator now makes it eight story journey to the entrance of the news giant’s studios. The legacy of the Kroffts survives today with revivals of “Sigmund and the Sea Monsters” (Amazon) and “Electra Woman and Dyna Girl” (Fullscreen) and other projects (“H.R. Puffnstuff” and “Land of the Lost”) in the works.  A box set of the trippy seventies saturday morning entertainment is available from Amazon.