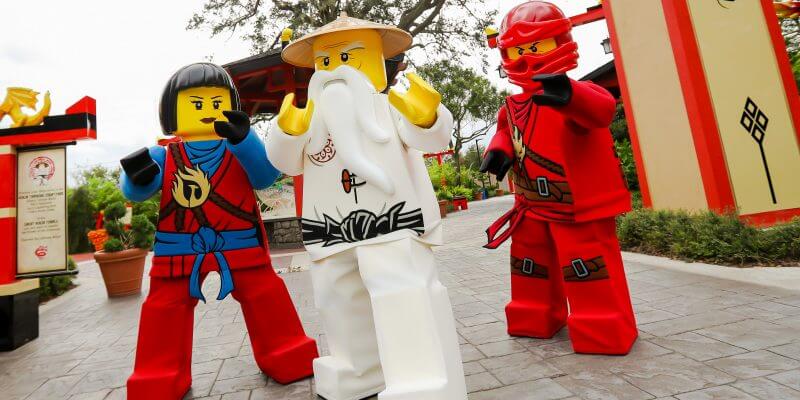 LEGOLAND Florida has a blockbuster lineup of events for 2018, kicking off in January with LEGO NINJAGO Days.

On January 20, LEGO NINJAGO: Master of the 4th Dimension opens. The new attraction is a theatrical experience combining 3D computer animation with real-world “4D” effects. Ninjas Lloyd, Kai, Jay, Cole, Zane, and Nya must find their way out of a mind-bending dimension filled with eye-popping visuals. The show is performed daily in the Wells Fargo Fun Town Theater. LEGO NINJAGO Days take place on January 20 – 21, 27 – 28, and February 3 – 4. Celebrate your favorite ninja heroes with exclusive in-park activities and meet-and-greets with Kai, Nya and for the first time ever – Master Wu. Then become the ninja in LEGO NINJAGO World, where kids battle against familiar foes like Lord Garmadon and the Great Devourer aboard LEGO NINJAGO The Ride.

As previously announced, The Great LEGO Race opens in Spring 2018. The new ride combines cutting-edge VR technology with roller coaster thrills. One of the park’s existing Project X rides is transformed into an all-new adventure starring a wacky cast of LEGO minifigures.

KIDZ BOP Weekend returns to rock the park with three days of high-energy concerts, including the debut of the KIDZ BOP Kids’ official theme song for LEGOLAND Florida Resort, “Awesome Awaits.” Plus, fans will enjoy exclusive meet-and-greets with the coolest kids around – Ahnya, Cooper, Freddy, Isaiah, Julianna, and Sierra. Stand by for an announcement about 2018 dates.

Bigger than ever this year, LEGO Star Wars Days return on May 5 – 6, 12 – 13, and 19 – 20. Enjoy a huge new LEGO  Star Wars display in MINILAND USA during a record three weekends of fun from “a galaxy, far, far away.” Activities include meet-and-greets with LEGO Darth Vader and – new! – a LEGO character from “The Force Awakens” and “The Last Jedi,” hands-on LEGO Star Wars building activities and much more.

For Fourth of July, LEGOLAND lights up the skies above Lake Eloise with one of the biggest fireworks shows of the year. Before the sun goes down, help create a giant U.S. flag out of thousands of LEGO bricks. Finally, the Kids’ New Year’s Party is back in late December. The multi-day party invites kids to move and groove at a high-energy dance party, set fun goals for the year ahead and go on a special scavenger hunt in MINILAND USA before ending the night with an amazing fireworks show over Lake Eloise. Then on Monday, Dec. 31 only, ring in the new year with the traditional before-midnight “brick drop” and an even bigger fireworks spectacular.

With the exception of Brick Dash, all events are included with regular theme park admission.