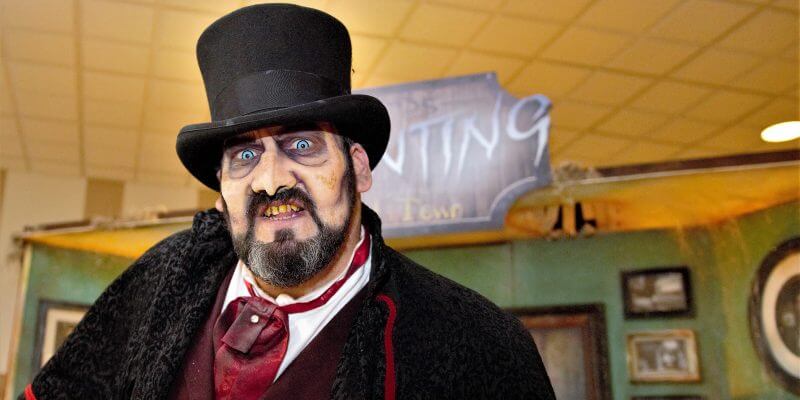 I had the fortune of finding a few free minutes to chat with Mr. Carro to learn more about his imaginative, talented artist and owner of Carro Creative. A father of two (his son now joins him on many of his creative endeavors) and Central Florida resident, Dan Carro’s professional drive and amazing artistic abilities keep extremely busy.  From his full time tasks as creative director of Orlando’s oldest attraction, Gatorland, to his phenomenal graphic design work and various other projects in the themed entertainment realm, Mr. Carro’s clever creations are always a delight to experience.  The results of his projects make it clear that he enjoys what he does. It’s no secret that his true passion is haunted houses.  I was thrilled to be able to inquire further about this love for eerie entertainment:

MG: Our readers will recognize your talents from Legends, A Haunting at Old Town.  Please share a bit about your background (in the haunt arena).

DC: I started as an actor at Terror on Church Street and eventually moved to the opening team of Skull Kingdom, a year round haunts in I drive. I learned to direct commercials, design sets and costumes and really tighten the skills I’d need in my career. Most haunts, especially back then, were open only weekends in October. That means a haunt season in many attractions equals 8 to 10 days of acting. By that reasoning, working 5 days a week haunting, we had hundreds of years of haunt experience by the time the attraction closed. I would go on to direct Halloween events for various parks including Pirates Dinner Adventure, Gatorland and Old Town as well as consult and create art for haunts like A Petrified Forest, Shallow Grave, Long Island Fear Fest, Dark Hour, Fatal End, Fear Asylum, Spooky Empire and others. I, of course, co-owned Legends: A Haunting at Old Town where I played Archibald Ashdown. I also was instrumental in design, set and costume fabrication, advertising, writing and show direction there. I’m very proud of that show and how it was received. MG: What would you say is your favorite Halloween/Haunt character?

DC: Playing Archibald Ashdown was a thrill for me. I tried to create something with him that took inspiration from Universal’s great Halloween Horror Nights icons like Jack and Director, but with a pinch of late night horror host humor. Archibald was very, very well received. I don’t know that we’ve seen the last of him. MG: What haunt projects are you currently working on these days?

DC: I am very proud to be working on Traumatica, in Rust Germany. This event is for the Mack Corporation. They design incredible attractions for theme parks all over the world. I’ve been hired to do creative direction for their new Halloween event. This entailed working with Mack Solutions in creating 5 new haunts, icon characters, an ad campaign as well as helping to develop merchandise and a multi-year plan. The goal was to create a park wide event with one cohesive story. MG: Please elaborate a bit more about the theme park (Europa Park) and what you have in store for guests this Halloween.

DC: Each house ties together to the point where characters from one house appear in other houses. The houses and scare zones work together to create one world that the guests become a part of. It’s a thrill to be involved with something this big.

For details on the exciting experiences at Traumatica (the nighttime haunts at Europa Park), check out this video from their Facebook page.

As Halloween season’s sunset looms ever closer, the work doesn’t end.  Even now, Mr. Carro is hard at work designing a new attraction for a local theme park (“Stompin’ Gator Off-road Adventure” for Gatorland) and an exciting new escape room experience, but those are stories for another time.

Amid all the amazing talent and creative successes Carro Creative has enjoyed, Dan Carro hasn’t let any of that go to his head.  Always kind, gracious and professional, his personality is the hidden gem of a treasure trove of talented creations.  I look forward to enjoying the next exciting experience to emerge from the imaginative mind of Mr. Carro. Comments Off on Interview: A chilling chat with Orlando’s talented haunter Dan Carro – aka Archibald Ashdown