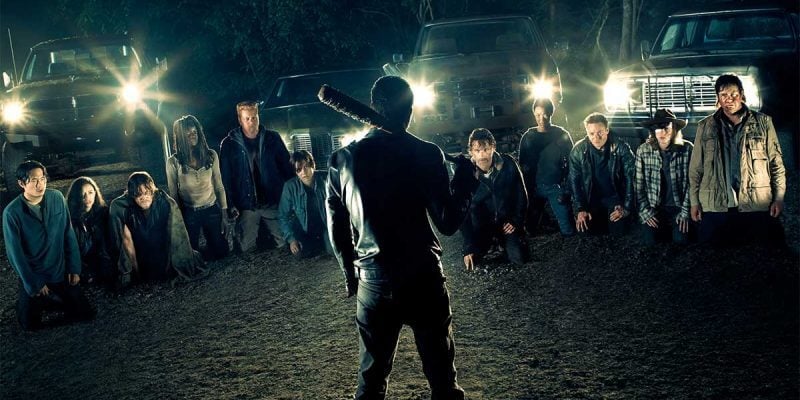 AMC’s hit series “The Walking Dead” returns this Sunday with its eighth season, which will kick off with the 100th episode of the show. The apocalyptic drama has made audiences fall in love with its characters and return every week to sit at the edge of their seats, wondering who will survive and who won’t.

If you’ve watched the show from the beginning, you’ve probably fallen in love with at least a couple of the characters. You’ve also probably been devastated by the loss of a few along the way. Strangely enough, it’s those devastating moments that set “The Walking Dead” apart from almost anything else on television. Those moments that make you feel like you just took a punch to the heart are what really attach you to this show.

Here are the most gut-wrenching scenes from each of “The Walking Dead’s” seven seasons:

Only a few episodes into a brand new show, it’s difficult to develop an attachment to characters to a degree of being completely distraught with their death. We did lose a few characters in the first six episodes of “The Walking Dead” but the toughest was probably Amy.

It wasn’t so much the connection to the character, but rather the way she died. After being attacked by a horde of walkers, the group was saved by a few returning characters including Rick and Glenn, but not before Amy was bit. She later died in her sister Andrea’s arms in one of the early tough losses for our group. By the second season, we all pretty much knew that Shane was not a good guy. Even after everything he did, including luring his best friend out into the woods with the intention of killing him, watching his death was still difficult.

Again, it wasn’t because of the character. It was the way he was killed. We didn’t feel badly for Shane, we felt badly for Rick who was forced to kill his best friend in self defense. The powerful ending scene of the show’s 18th episode shows Rick holding a knife in Shane’s chest while screaming “Damn you for making me do this Shane! This was you, not me!” For many, this was the moment where it became clear that no one on this show is safe. Lori died giving birth and in true macabre fashion, Carl had to be the one to put her down before she came back.

It wasn’t the actual death scene that was so hard though. It was Rick’s reaction after he found out what happened. For one reason or another, this has become one of the most memorable scenes in the show’s history. It may be a joke to some, but for fans of the show, seeing Rick break down as Carl keeps a blank stare is a tear-jerker. If you watch this show then you know the “moral compass” of the group is almost always the next character to go. This was the case for Hershel. After the Governor captured both him and Michonne, he decided to make an example of the beloved doctor in front of Rick and the group.

Rick tried to save Hershel by delivering a moving speech explaining how they were “not too far gone” and “they get to come back.” For a moment it looked like Rick had gotten through to the Governor before he lifted Michonne’s sword and uttered one word: “liar.” Seeing the group’s reaction to Hershel’s death was the hardest part, especially his daughter’s Beth and Maggie. The eighth episode of a season typically doesn’t go well for Maggie. In this midseason finale, the group attempted to rescue Beth and Carol from a hospital filled with police officers that were using survivors as slaves. After initiating a prisoner trade, it looked likes the two would be rejoining the group before things went south.

One of the police officers made one comment too many and Beth stabbed her with a pair of scissors, which caused the officer to reflexively shoot and kill Beth. After Darryl killed the officer, the two groups held their fire and parted ways, which led to a dramatic scene in which Darryl carried Beth’s lifeless body out of the hospital to her hysterical sister Maggie. It was one of the hardest scenes to watch. Ok, first let me clear one thing up. Yes, the final scene of season six is the one in which the group is being held captive and Negan delivers that chilling speech. However, while that scene is maybe the most tense in the history of the show, it didn’t deliver a gut-punch like this one did.

In the end, we found out that Glenn survived after Nicholas shot himself, causing the pair to fall right into a heard of walkers. At the time though, it looked like he was a goner. The scene especially caught everyone off guard because it happened in just the third episode of the season, leaving everyone with a broken heart. There was no doubt about this one. Glenn was one of the most beloved characters in the show and one of just six remaining from the first season at this point. We did have a lot of time to prepare ourselves, knowing that Negan would kill someone at the end of season 6 (and yes, we know what happened in the comics), but we let our guards down when it was revealed that Abraham was Negan’s victim.

The gruesome nature of the death made it so much worse too, with Glenn getting his head smashed in by Negan’s bat Lucille. It also didn’t help that it happened right in front of the group, including his pregnant wife Maggie. This was possibly the most painful scene in the history of “The Walking Dead.” We’re all looking forward to the eighth season of “The Walking Dead,” even if we do expect to be tortured with more excruciating scenes like the ones we have seen in each of the past seven seasons.

What do you think is the most gut-wrenching scene from “The Walking Dead?” Let us know in the comments below.