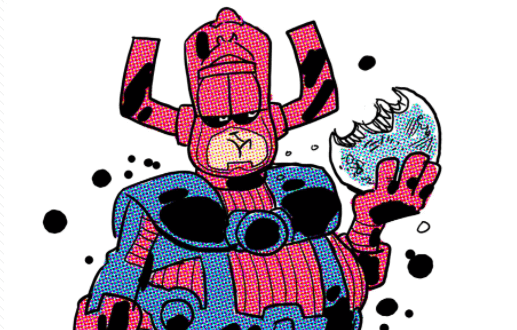 Comic creator Jim Davis is best known for producing the stories of probably the most famous fat cat of all time, Garfield. So it should come as no surprise that his take on Marvel’s massive, intimidating villain Galactus would come with some humor.

In an upcoming issue of “Unbeatable Squirrel Girl,” the adorable little hero and her friends create their own comic books, with various comic artists providing the styles. Davis was asked by the comic’s writer Ryan North to come on for the project.

“Ryan North sent me an email last winter about this idea to do a special Squirrel Girl issue drawn by the cartoon characters themselves, with different artists for each style,” Davis said in an interview with Entertainment Weekly. “He explained Galactus seemed like a logical one for me, because of Garfield — having the appetite of the planets, and being one of the biggest and oldest of the Marvel characters. Garfield will be 40 next year, and is himself reaching iconic status.” This preview of Davis’ Galactus story shows how Galactus and the Silver Surfer mirror Garfield and John respectively.

“Unbeatable Squirrel Girl #26” will be available in stores November 8.