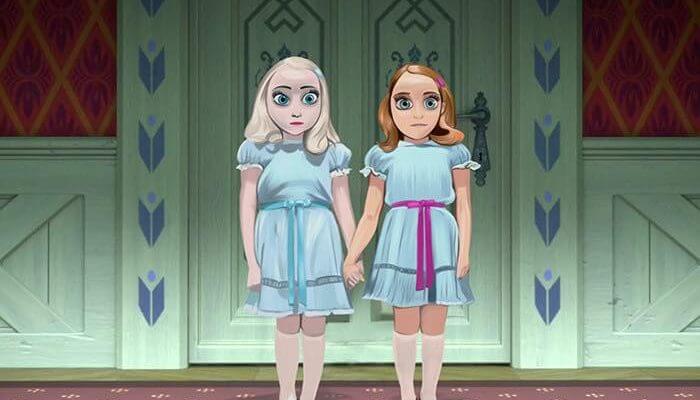 The season of pumpkin spice flavored everything, ghosts, gourds, ghouls and graveyards is finally upon us.  As the spice must flow, so must the spooky-boo re-do for all things materialize.

We’ve come to expect Jack Skellington and company’s take-over of Disneyland’s (California) Haunted Mansion and already have news of a new “Guardians of the Galaxy” Halloween overlay. Disney Characters will soon be seen in spooky style and all that deliciously dark and fiendishly fun for fall fun. Even the Disney princesses have been given their own ghastly get up. . . Anna and Elsa seem to have traded Arendelle for the Overlook hotel in this “the Shining” inspired scene featuring the spooky sisters (officially they are not twins, described as age 8 and 10) originally encountered by Danny Torrance. Mulan makes a macabre appearance in this scene inspired by “The Ring.” Who knew that “The Creature from the Black Lagoon” was a ginger?  Ariel looks like she definitely wants to know where the people are. This bloody memory inspired by “Carrie” is a perfect fit for the Cinderella story, given how the poor girl was treated by her step-mother and step-sisters. It has sometimes been rumored (and novels have been written to that theory), that Sleeping Beauty may have actually been a vampire.  Travis Filligant has stake in that theory based on his fangtastic take on the Disney princess. Break brought out 11 familiar freaky horror scenes in total.  Others, not shown above,  include Belle transforming into the Wolfman, Tiana stalks as Candyman, Snow White and the Seven Dwarves channel Freddy Krueger, Merida masquerades as Chucky and a possessed Jasmine arrives on carpet in a scene inspired by “The Exorcist.”

For those who are fan of these creepy cool cross-overs, what other horror movies/scenes and Disney characters do you think might make a magnificent macabre match? Spin your tale of terror in the comments below.