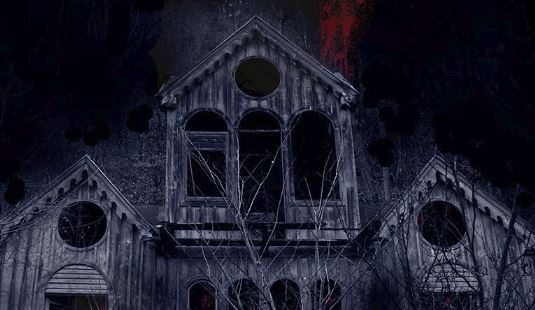 For 2017, I didn’t have to dig deep or go ghost hunting for long. The vast library of Amazon Prime Music allowed these ears to find and sample the spookiness before forfeiting the funds. Any of these five fun, fearsome finds can add a creepy cool layer to your home haunt or spooky shindig.

A trip through several spooky decades and sinister styles of Halloween, “American Horror Songs” is a happily haunted ride.  Featuring vocals and instrumental ambiance, this collection 114 Halloween songs includes classics like “The Raven,” read by Basil Rathbone, “Season of the Witch” by Donovan and classics like “This is Halloween,” and “The Monster Mash.”  Familiar movie themes and novelty songs join classical music, rock and roll and more on this diverse duo of discs.  Find “American Horror Songs” on Amazon for $17.98

Myuu’s “Horror Soundtracks” materialized on my monitor months ago as an Amazon music recommendation.  I loved the dark and ethereal sound produced for this haunting album.  This prompted me to see what else I can dig up from the artist. “Halloween Piano Tribute” is fresh take on some frightening and familiar faces in terror tunes.  Myuu’s piano treatment of these tracks make this album a perfect companion for a dark dinner party or Halloween wedding. Check out his YouTube channel for a mausoleum full of macabre music (including a creepy cool collection of spooky playlists, and -for when Halloween passes – some dark Christmas sounds)

Both albums can found on Amazon: “Halloween Piano Tribute” for $5.99 and “Horror Soundtracks” for $8.99.

This devious duo has produced wonderfully whimsical Halloween recordings for the past several years.  Each release unleashing a dark, magical mix of ambiance, dialogue and music that’s perfect for the Halloween season.  For more fear to hear from William and Wendell of Sideshow Sound Theater, (and how to find their music) visit our feature on this great group. Be sure to visit their website on Halloween, as “The Toymaker” makes its debut.

Their music has been featured in over 1000 movie trailers and has appeared in television shows and video games (Harry Potter movie trailers, “Resident Evil” video games, and “Doctor Who” to name a few).  I’ve not heard a song from this duo of composers that I haven’t liked.  Mostly upbeat and adventurous, listening to music from this group is like having your own personal soundtrack.  For their “Halloween” album, which is mostly ambient and instrumental masterpieces, Two Steps from Hell also added a few sinister sounding songs to the macabre mix for this album and they work beautifully for this spooky season.  48 tracks of hauntingly brilliant music can be found on Amazon for $6.99.

Vitamin String Quartet (VSQ) has been producing amazing covers of pop and rock music since.  This string based cover group includes violin versions of “Star Wars,” “Star Trek” and “Harry Potter” soundtracks in their vast library.  Giving the string treatment to Danny Elfman’s “the Nightmare Before Christmas” sets the mood for a more subtle, spooky dinner party or wedding. In fact VSQ has even produced a series of wedding albums with many of the covers.  Another Halloween must-have VSQ disc worth discovering is “Blood Curling Strings VSQ Pays Tribute to Horror Classics” featuring familiar fear film sounds.  Both albums can be downloaded from Amazon – “Nightmare Before Christmas” tribute will set you back $10.49 and purchasing the horror tribute will make $8.99 disappear from your wallet.

While these may not be new releases for 2017, these 5 artists deliver dark delights that are perfect for any Halloween party, home haunt or other odd occasion where spooky songs and macabre music are in order.

BONUS – John Carpenter’s “Halloween” score is almost always heard at some point doing this fall fear season. This year Trent Reznor and Atticus Ross have teamed up for a brand new update to this terror-ific tune:

Comments Off on FAV 5: More Macabre Music to Haunt Your Home