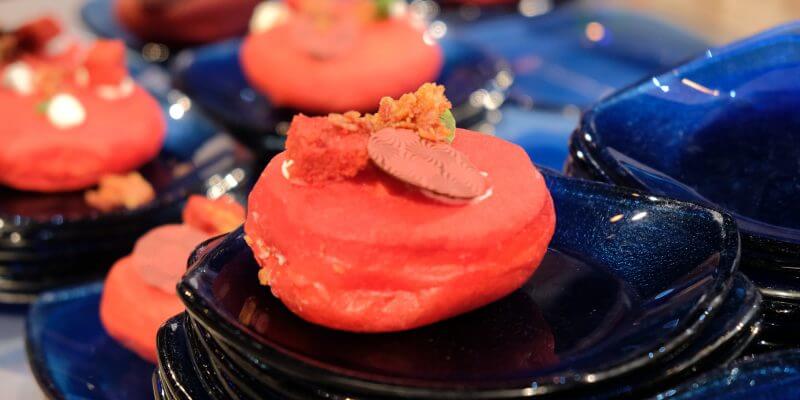 Epcot’s Party for the Senses is a wonderland, full of delightful dishes and desserts that will take your taste buds to new heights.

Epcot has been known for its exciting dining experiences since the beginning of the Food & Wine Festival 22 years ago. Another way to experience some of Epcot’s finest food offerings is the Party for the Senses, which is a spectacle of culinary giants, master sommeliers and memorable music.

Upon entering the World Showplace, you are immediately taken over by the scents of a mass of different foods. Which comes with the beautiful scenery of chandeliers hanging from the ceiling and mood lighting projected around the room. WATCH – INSIDE EPCOTS PARTY FOR THE SENSES:

You are then brought into a long line full of eager and hungry guests awaiting the moment the night begins. Here guests are rounded up to check in, once completing this process, visitors are given a table number to guaranteed seats for themselves and the rest of their party. And when the clock strikes 7:30, the culinary magic begins. Guests are released to make their way to their tables, where they will find a sparkling clean wine glass and an empty plate to carry food with. Next to that is a trifold guide which has a map and a detailed list of all of the eatery locations found throughout the Showplace. Under the name of each eatery is a description of the dish, desert and or wine being served. As you walk around the large room, you can’t help but continue to take in the amazing smells of the food offerings. You may even catch a few overly excited guests running across the showplace with wine glass and plate in hand, ready for their next sampling. Fresh silverware is provided at each booth to keep from combining different tastes among different dishes. The event also features live music throughout the night from a cover band that plays classic songs, like “It Had To Be You” by Tony Bennett and “The Frim Fram Sauce” by Nat King Cole. Later in the night, the band plays more upbeat music, and guests get to get up and dance along on the dance floor. The band is definitely talented and their music and overall feel make the night even more elegant. The Beef Tenderloin Nigiri Sushi with jalapeño aioli is a more fun dish at the event, as it is a smaller offering served with chopsticks. The beef is seasoned nicely and the touch of the jalapeño aioli gives the dish a nice kick, but it isn’t too spicy or overwhelming.  This was one of the more popular dishes of the night as the line for this sushi was wrapped around the World Showplace. The Togarashi Spiced Mahi over cashew cabbage salad is by far the spiciest dish of the night. One bite of this mahi and your mouth feels as though it could have lit on fire. The flavoring is delicious, but you definitely want to have a glass of water at hand with this fish. Now for the sweeter part of the night, the desserts! The Red Velvet White Chocolate Donut with candied Bacon had to have the longest line of all of the desserts in the showplace. This dessert was delightful, as it was red velvet flavored and filled with a nice white chocolate cream, which isn’t too thick. The cream is on the lighter side, which actually makes the dessert lighter overall, especially for a donut. The Peach Cobbler with sweet corn maple bacon ice cream is also a nice dessert. This dessert is on the daintier side as it is served in a small glass cup. Although, this definitely is on the richer side, as the peach cobbler was made with thick crust that is really sweet. The topping of the bacon ice cream is a refreshing pairing as it diffuses some of the richness of the cobbler, making it not so overwhelming. The Blueberry Cream Cheese Mousse was also served at the event. This dessert can be found at Animal Kingdom at Pandora – The World of Avatar. Made with passion fruit curd and chocolate mousse cake with banana whipped cream. This is probably the richest dessert at the event as the chocolate mousse cake is very rich and the banana whipped cream seems to make the dish even more rich. I would recommend this dessert for the foodie who loves a sweet and super rich dessert that will have your tastebuds begging for mercy, or maybe a glass of milk. For the coffee lovers out there, the event also contained a Joffrey’s Coffee booth which featured different hot and cold caffeinated drinks to enjoy after your meal. One special drink from the booth that caught the attention of most of the crowd was the Nitro Cold Brew. What’s so special about this drink is the fact that it featured Minnie Mouse imprinted on the drink’s foam. Definitely a fun drink to end the night with, especially for those who aren’t big on wine. Epcot’s Party for the Senses will run select Saturday nights from 7:30-10:00 now through November 11. Price per guest range from $179-329 depending on the night’s festivities and seating area. To book your reservation, call (407) 939-3378 or visit the official website.