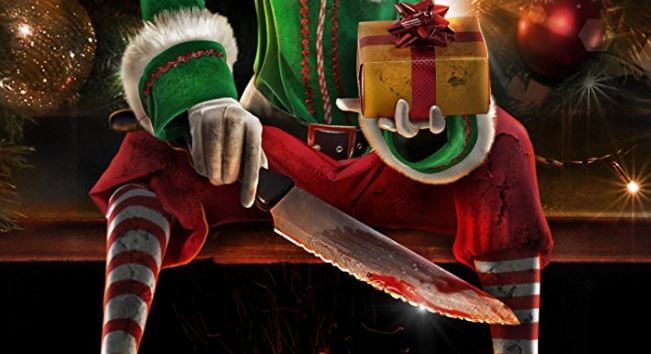 Tired of Christmas invading Halloween?  Wish Halloween could last beyond October 31st? Fear not, there is hopeless holiday horror on the way.

While it may not stem the tide of ever encroaching Christmas decorations from erupting all over retail shelves at the same time (or even before) Halloween happiness arrives, “The Elf” might just be the cure to soothe the savage soul.

“The Elf” examines the darker side of those watchers to sit on the shelf.  Keeping tabs on those who deserve to be on the “naughty list,” this cursed Christmas doll discerns delivery of holiday horrors for anyone making the list.

“Nick is haunted by night terrors stemming from a tragic murder he saw when he was young. After inheriting an old toy shop, he discovers a cursed elf doll sealed inside an ancient chest with a naughty list of his family’s names written on it. He soon discovers that the elf was an evil conduit meant to unleash a supernatural killing spree during the Christmas Holidays by whomever set it free.” –IMDB Directed and written by Justin Price (“The Cloth”) and produced by Pikchure Zero Entertainment, “The Elf” is set to be unwrapped just in time for the horror days holidays.  Video on demand and digital downloads begin on November 7th and DVDs drop on December 5th. “The Elf,” along with several other b-movie fear films, is distributed by Uncork’d Entertainment (“Krampus Unleashed,” “Krampus: The Reckoning”). As this naughty list nightmare is a direct to video release, this Christmas creeper may not have silver bells and whistles of a major motion picture. However, “the Elf” is sure to satisfy those who feel like Christmas has encroached on Halloween for far too long. What is your favorite fear film for holiday horrors?  Please tell your tale of terror in the comments below.

Comments Off on “The Elf” leaves the shelf to terrorize in new horror film, just in time for the holidays