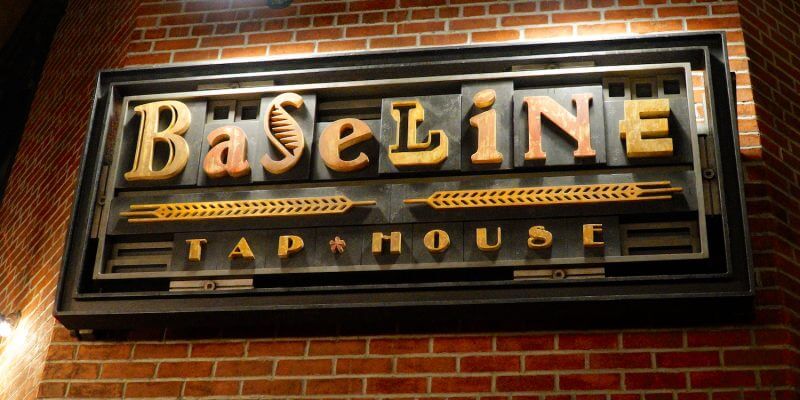 The new Grand Avenue area highlights the familiar look of vintage office buildings and warehouses that represent the real Hollywood city in California. Facades are filled with fictitious local business including a florist, tailor, and delicious-looking deli.

It’s all a bit reminiscent of Buena Vista Street at the Disney California Adventure theme park – though with a modern twist. The sounds of the area reflect downtown LA as well, with faint piano music emanating from what could be a quaint hotel along with plenty of piped in street sounds to give the whole area life.

But the new area is more than just show. It prominently features the park’s new BaseLine Tap House, a fantastic corner pub with a design aesthetic inspired by the real-life Figueroa Printing Company, a mom-and-pop print house that had ties to the Disney Studios in Burbank, Calif. Once inside, guests can easily forget they’re in a theme park. The bar oozes authenticity, with its exposed semi-industrial architectural details with exposed brick walls and old printing equipment and artifacts. Printed (and semi-printed) Disneyland paraphernalia adorns the walls as well, making patrons feel as if they are truly in California, rather than Florida. On the outside is a tree-shaded terrace, a nice spot for a break from the sun. BaseLine Tap House specializes in California beers and wines, with California craft ales, lagers and cider as the stars of the drink menu. California wines are also on tap along with some delicious specialty cocktails. (Non-alcoholic lemonade and soda are available as well.)

You can’t go wrong with the choose-your-own beer flight and the California Sunset. The bar has just the right feel to it. Its low indoor capacity of just 55 guests (no doubt a nod to Disneyland’s opening year of 1955) allows the space to always feel intimate.

There are a few small bites to enjoy along with the drinks, including the signature Bavarian pretzel with mustard and beer-cheese fondue that’s so good you could drink it. A charcuterie board featuring California cheeses and spiced almonds are fantastic bar snacks as well, especially when sharing among friends. BaseLine Tap House is a place that’s easy to want to hang out in – and I’ll be happy to do just that next time I’m at Disney’s Hollywood Studios. It’s a great reprieve from the hustle-and-bustle of the rest of the park, open daily at 11 a.m. until park closing. Comments Off on BaseLine Tap House and Grand Avenue debut at Walt Disney World, bringing a taste of downtown Los Angeles to Orlando