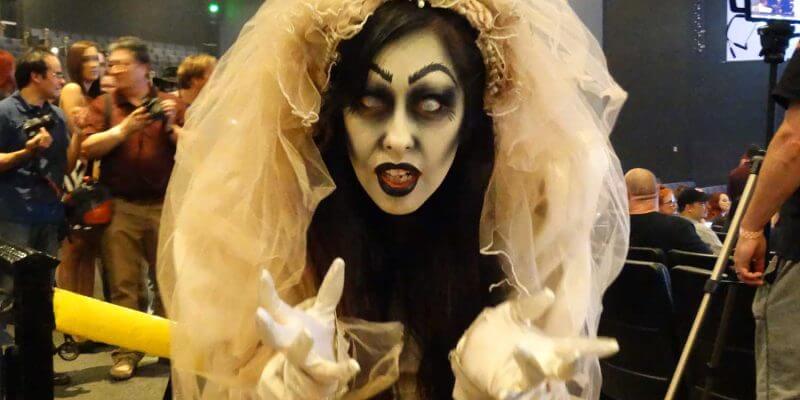 For going on forty seasons, Knott’s Scary Farm has established itself as one the premiere destination for Southern California Halloween fans during the spookiest time of year.

And in recent memory, at the end of each summer, Knott’s Berry Farm fanatics have gathered at the Charles M. Schulz Theatre inside the park for an annual announcement event revealing, among other things, all the new and returning mazes, scare zones, shows, and attractions Knott’s Scary Farm 2017 will have to offer. This year’s event happened just last night, and it proved to be very exciting.


After the announcement event, I had the opportunity to speak with some of the key members of the Knott’s Scary Farm creative team, who clued me in on what they were most excited for about this year’s Haunt, how the new mazes were conceived and executed, and what fans can expect when they walk through the gates once again in just a few weeks.


The evening also featured a Q&A with the same creative team, as they fielded questions from attending media and gave reporters an intriguing taste of how Knott’s Scary Farm functions behind the scenes.


One of the most alluring new attractions this year (especially for theme park fans) is Dark Ride– a maze inspired by abandoned carnivals of the 1970s, wherein guests will actually walk the track of a creepy broken-down ride called Castle of Chaos before they wind up in a “backstage” area at a fair where malevolent clowns are on the rampage. Also appealing this year is the Timber Mountain Log Ride overlay entitled “Halloween Hootenanny,” which will mark the first time the classic water attraction will receive Halloween theming for Scary Farm since 2012. Another new maze is Pumpkin Eater, based on the 18th-century nursery rhyme and decked with all matter of guts, both from pumpkins and otherwise. But perhaps the most intriguing new draw of this year’s Knott’s Scary Farm is Trick or Treat: Lights Out, a redesign that turns off the electicity on the popular but now six-year-old Trick or Treat maze. Each guest will be handed a show-controlled flashlight upon entering, and from everything that’s been divulged about what they’ll find inside, this sounds like it’ll be a scary one. Returning mazes include The Tooth Fairy, The Red Barn, Paranormal Inc., Voodoo: Order of the Serpent, ShadowLands, and Special Ops: Infected. Scare Zones are once again The Hollow, Fiesta de los Muertos, and CarnEvil, Ghost Town– but this time, even Knott’s Berry Farm mainstay Sad Eye Joe will get in on the Scary Farm action by transforming into Mad Eye Joe. As far as shows go, “Elvira: Mistress of the Dark” will make her final appearances at Knott’s each night this season, and the long-running satire “The Hanging” will return to Calico Square with the title “Fake Noose,” poking some fake-violent fun at everything that’s happened in pop culture and politics over the past twelve months. It’s all shaping up to be one of the best all-around seasons yet at Knott’s Scary Farm. The event runs select nights from Thursday, September 21st until Tuesday, October 31st at Knott’s Berry Farm in Buena Park, California. Be sure to visit the Knott’s official website for more information and advance ticket sales resources.