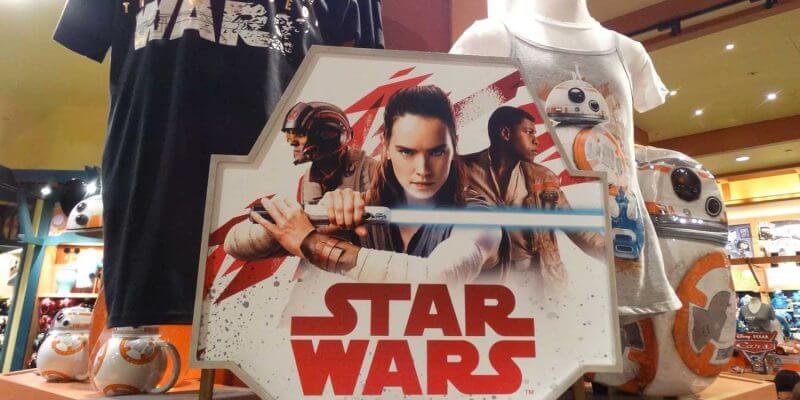 “Star Wars: The Last Jedi” is now under three and a half months away, and this morning’s Force Friday event marked the first major merchandising milestone for the third movie from Lucasfilm under its new owner Disney.

Fans around the country lined up at big box stores last night to get a first crack at picking up their most sought-after toys and a wide variety of other licensed Star Wars tie-in-products featuring characters, ships, and locations from “The Last Jedi.” But Southern California Disney addicts knew the best place to stake their claim: the World of Disney store at Disneyland Resort‘s Downtown Disney shopping district.


Located just outside the main entrance to both Disneyland and Disney California Adventure theme parks, World of Disney stocked up on most everything a Jedi could want coming out of last night’s event– including action figures, lightsabers, t-shirts, and even those delightfully cute stuffed Porgs.

Fans arrived early Thursday afternoon to check in at Disney’s Grand Californian Hotel & Spa, where they were given a bracelet and return time for later that night. Then, once midnight arrived, guests were let in World of Disney’s front doors and allowed access to all manner of Star Wars goodies available to purchase. And Annual Passholder discounts were even applied to purchases, giving Disneyland regulars a hefty advantage! “Star Wars: The Last Jedi” will be released into theaters nationwide on Friday, December 15th. For more Force Friday news and deals, be sure to visit ITM’s dedicated tag for the event.