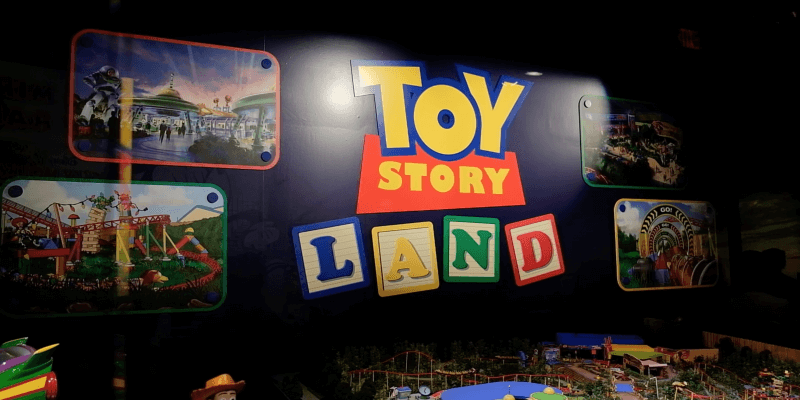 Today, Disney has put on display a new model of Toy Story Land, which is set to open in Disney’s Hollywood Studios in the Summer of 2018. When guests enter the new land, they will “shrink” down to the size of a toy and get to explore Andy’s backyard.

The new model is joined by other memorable elements from the “Toy Story” movies. This includes small models of Buzz, Woody, an Alien, Jessie and Rex. You can also find a maquette of the ride car for the new Slinky Dog Dash attraction. This ride and Alien Swirling Saucers will be the two major attractions found within the new land when it opens. The Alien Swirling Saucers attraction will be designed as a toy play set that Andy got from Pizza Planet, which was featured in the first “Toy Story” film. During the ride, Aliens are flying around in their toy flying saucers while trying to capture each guest’s rocket toy vehicle with “The Claw.” The model also features the other famous new ride coming to the land, the Slinky Dog Dash. This ride is set to be a new coaster attraction that is meant for guests of all ages. If you look close enough, you can actually see Rex sitting on top of the Jenga tower in the picture below. He is sat next to a bunch of other building blocks, which also follow in theme with the rest of the land. The attraction will take guests on a ride where they get to zip, dodge and dash around fast turns and drops.  It is said that Andy created the wild track himself with the purpose of trying to make Slinky’s coils stretch to their limits. At the entrance to the land is where guests will be greeted by a famous star from the film series, Woody. You can also see famous characters from the film throughout, including Buzz, who can be found outside of the Alien Swirling Saucers ride. In the model you can find seating areas, where guests can take a break from the miniature land to grab a bite to eat. Around it are what appear to be new restaurants located within the land. Below, you can see a location with a sign that reads “Midway Games.” This area looks like it will be an arcade area with different types of games for guests to enjoy when they want to take a break from the rides. This is only a preview of what is to come in the new land, which is set to open at Disney’s Hollywood Studios in Summer 2018.